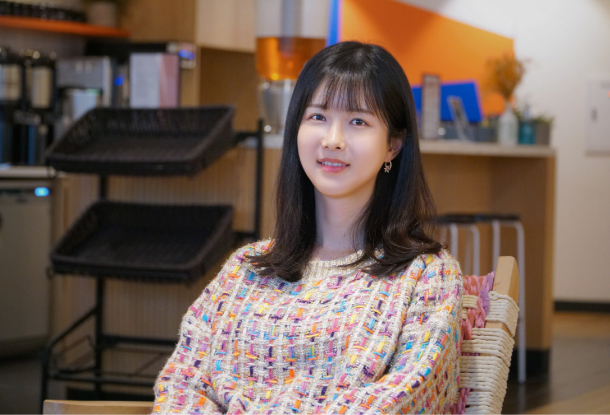 YouTuber Pani, who answers questions about being transgender through her popular channel, sits for an interview at the office of her agency in southern Seoul. [JEON TAE-GYU]

“I don’t regret undergoing surgery. In fact, I’ve never even asked myself why I had this surgery.”

Pani, a transgender YouTuber with 87,500 followers and a total of 29.6 million views of her videos, answers questions that people have for transgender people but can’t ask them directly.

What can you say to a transgender person? Is being transgender a mental illness? What is reassignment surgery like? How did she come out to her family? These are some of the questions that Pani answers, and she does so in a friendly and casual way that’s easy to understand.

Born in 1986, Pani spent her early childhood years confused as to who she was because she felt that she was “different” from other people in many ways. In her first year of high school, after she saw singer Harisu come out as the first openly transgender person in Korea, Pani says she felt certain of who she was for the first time. She underwent reassignment surgery in 2011.

“I live my life thinking, let’s do what I want, but not harm other people,” she said.

Pani recently sat down for an interview with the Korea JoongAng Daily at the headquarters of her agency Sandbox in southern Seoul. The following are edited excerpts.

Q. When did you first realize that you weren’t feeling at home with your gender?

A. There were moments from when I was in kindergarten, where I would do the things I wanted to do and people would say, “You’re a boy, why would you play like that?” In elementary school where you start to distinguish girls from boys, people picked on me for not being manly enough. In sixth grade, I felt like I had a crush on a boy. From then and onwards, when the lines between men and women became clearer, I felt like I was different in some way - far from people. It was the hardest for me in middle school.

How did you push through those difficult days?

Back then, the internet was getting more widely used, and I could get a lot of information with even minimum English. I think the younger people nowadays will find it easier than I did. But it’s difficult to make anyone else other than our community understand us. There are a lot of discussions around the world involving health experts and even the World Health Organization, but it’s just a course of life that one person lives through.

It’s about the self-hating of their situation, the gender dysphoria and the need to change their genitals because they hate it. You can’t explain to anyone else what it feels like to think that the gender you’re born with is different from your body. You know it doesn’t feel right, but you don’t really know how to explain it. But I do think it’s wrong to call someone mentally ill just because they can’t explain it properly.

I want to show people that I’m not special. I want people to realize that we can be anywhere and they would never have known it. I wanted to break the stereotype that the media showed of us, and tell everyone that transgender people live their ordinary lives just like all the others around you - and that they could even be [a part of] your family. A lot of people have prejudice against transgender people and think that they are either sexually perverted or act and dress weirdly. I thought it could help people change their perspectives if they realized that I could be your work colleague sitting next to you and you wouldn’t even notice it.

What was one of the hardest things about changing your gender?

You have to go through a lot of paperwork to change your social status, like your social records, criminal records and gynecology diagnosis. Even when you’re an adult, you need consent from your parents, but a lot of times, that’s not possible. There are people who don’t even have friends supporting them. But a lot of that is changing, so that’s fortunate.

The surgical expenses are really burdensome. Currently, the person undergoing a surgery has to finance it 100 percent, but I’ve heard that there are countries that provide tax returns or even financial support for the procedures.

What is the best way to treat transgender people in our everyday lives?

The best way is to treat them without over-thinking the fact that they are transgender. We meet our friends knowing whether they’re men or women. Men often refrain from saying some harsh jokes in front of women, but they wouldn’t always say, “Oh, I shouldn’t say this because you’re a woman.”

When talking to someone who is transgender, it’s actually uncomfortable [if someone] always asks whether we’re okay all the time. Just like the way you would talk to your colleague at work, ask things that are related to your job, or things like, “Did you watch this drama? Did you read the news?”