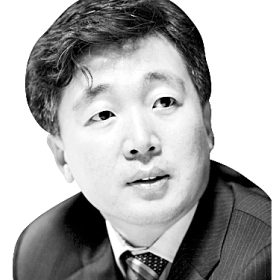 The coronavirus has made some things clear. It underscored problems with the authoritarian Chinese ways and how they relate to coping with an epidemic. For Korea, it has shed light on the impotence of our government.

Nearly two months have passed since the first infection was reported in Korea on Jan. 20. Yet the Moon Jae-in administration cannot even handle the supply of face masks. That alone shows how utterly incapable our government is.

What disheartens and angers the people is the liberal administration’s cluelessness combined with a kind of unabashed confidence. President Moon and his government are boastful about the country’s quarantine system being top-class and a possible global standard — even as Koreans are being banned from entering more than 100 countries. We can hardly expect soul-searching from people busy patting themselves on the back. Whether they are born egoists or are under a collective delusion cannot be known.

Maybe they have picked up the habit from abroad. Chinese President Xi Jinping finally visited Wuhan, the epicenter of the coronavirus (Covid-19) outbreak, amid some easing in the spread of the lethal virus. As China’s commander in chief, Xi was more or less declaring victory in his battle against the disease. The People’s War is a military strategy developed by Communist revolutionary leader Mao Zedong.

Xi has declared himself a war hero, even as the communist state should be held responsible for causing a global pandemic by ignoring a warning from a doctor who discovered a new strain of the infectious virus and kept the fact hidden until the outbreak went out of control. The culprit has suddenly morphed into a hero.

It is a typical communist trick to distort facts and brainwash the public. President Moon gloating about exemplary quarantine actions without any mention of his own sloppy early-stage response is not any different. Impertinence and denial must have slipped across the border along with the virus to infect policymakers here.

Seoul sloppily copied Beijing. As the Global Times of China pointed out in an editorial, diplomacy and quarantine measures cannot be mixed. South Korean Foreign Minister Kang Kyung-wha called her Chinese counterpart Wang Yi to protest Beijing’s quarantines of South Korean arrivals by Chinese cities and other local governments. Instead of getting a promise to ease the quarantine or entry ban, she was lectured by Wang on the need for timely controls on unnecessary human migration and traffic in containing the spread of an infectious disease.

Seoul erred in the most basic quarantine rule. It left borders wide open because it didn’t want to ruin a state visit by Xi before the April 15 parliamentary elections in Korea and did not want to upset Beijing. The controversy over the Moon administration’s stalling in closing the borders against China when infections had been sprawling across the mainland will come up time after time.

The Moon administration may not wish to admit its folly. But Hong Kong’s case sets a good example. Hong Kong is in a more awkward position to deny entry to the Chinese. The island’s economy hinges on the mainland and people freely go back and forth for work or shopping. Despite Beijing’s promise of sovereignty, the leadership of Hong Kong comes under the influence of the Chinese Communist Party from the election stage.

Still, Hong Kong slammed the door on people from the mainland. It could not take a second chance after the import of severe acute respiratory syndrome (SARS) infected 2,000 Hong Kong citizens and killed 295. As a result, Hong Kong has had only 120 infections and three deaths from Covid-19 this time.

If the Moon administration had been equally strict against entries, much of the damage today could have been avoided. But we would be asking too much from a government who cannot even solve a mask problem at home.