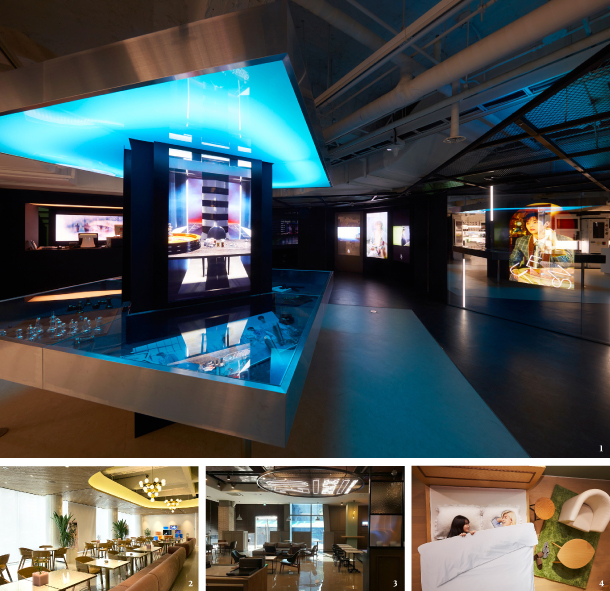 Museums have closed, concerts have been postponed and fan meet-and-greets have been canceled.

The coronavirus outbreak has stalled most of the arts and entertainment industry across the country, but your options aren’t limited to sitting at home watching music videos or videos of old concerts. Along with surprise pop-up stores that are opening up at different locations, there are still places open where you can interact with your favorite groups from a distance.

From cafes to exhibitions, there are plenty of places in Seoul that offer more than just merchandise that will satiate the hungry souls of K-pop enthusiasts until the virus subsides. Here are a few recommendations from the Korea JoongAng Daily.

In the basement floor of the Lotte Young Plaza - located next to Lotte Department Store in Myeong-dong, central Seoul - there is a special shop called Palette that is filled with all things K-pop. Just as a palette can have all of the colors of the rainbow in one place, this shop has all of the K-pop merchandise fans could ever want in one place, plus additional attractions to enjoy.

Palette opened in May 2019 as “a cultural space that allows people to experience music” according to Lotte Department Store. The store is a collaboration between Lotte Department Store, CJ ENM, Music Art, Copan Global and Rebel9. Its goal is to provide more than just merchandise, but also a place where fans can communicate with their favorite stars through various exhibitions, pop-up stores and events. It selects one K-pop act for its pop-up store and exhibition each month and started off in May 2019 featuring boy band NU’EST.

“There hadn’t been a place for fans to communicate with artists in the offline space. Palette aims to become a K-pop culture space where fans and artists can communicate both directly and indirectly,” an official from Lotte Department Store said.

Besides Palette, there are many K-pop record shops on the basement shopping complex in Myeong-dong, so take the time to check those out as well.

Open: Hours vary according to the Lotte Department Store schedule

With a longer history than many other agencies in Korea, SM Entertainment is home to many of the biggest K-pop acts in the world - boy bands TVXQ, Super Junior, SHINee, Exo, NCT 127, NCT Dream and SuperM; girl groups The Grace, Girls’ Generation, f(x) and Red Velvet; and singers Kangta, BoA and J-Min. Ever since the debut of its hit boy band H.O.T in 1996, SM has built up a vast archive of history to share, and now there’s a place to see and hear it all.

Coex Artium, otherwise known as SMTOWN, is located within the Coex complex in Samseong-dong, southern Seoul. The six-story building is known as the SMTOWN theme park in the city, featuring a gift shop on the second floor, the SMTOWN Museum on the third, the SMTOWN Cafe on the fourth and a large theater on the fifth and sixth floors. It’s open everyday of the year, from 11 a.m. to 9 p.m. The theater offers special hologram performances from some of SM’s biggest artists, and be sure to check out the schedule before you visit so that you can catch your favorite acts.

Another must-visit spot is the SMTOWN Cafe, located on the first floor of SM Entertainment’s Cheongdam headquarters in southern Seoul. The cafe and restaurant carries a standard menu - think coffee and tasty treats for lunch and dinner - but the menu items have been specifically chosen out by SM artists. Favorites include the SJ Burger recommended by the members of Super Junior, the SHINee cream roll and the Red Velvet cake. Be sure to drop by the official merchandise store on the basement floor of the building to top off your visit.

Most entertainment agencies have a cafe on the first floor of their building that the public can pop into to buy a drink. They usually carry special menu items that are related to the acts housed in their companies.

The 20SPACE in Seongsu-dong, eastern Seoul, is run by Cube Entertainment, home to boy bands BtoB and Pentagon; girl groups (G)I-DLE and CLC; and singers Lai Kuan-lin, Yoo Seon-ho, Jo Kwon and Jang Hyun-seung. The cafe carries the usual coffee and other drinks, with some surprise items including the Like Shake and Pentaro Bubble, that were released to celebrate the fourth EP “DEMO_01” of Pentagon. The cafe offers other special items for other artists, as well as some merchandise. The cafe often holds surprise events and pop-up stores, so keep your eyes open for news.

Other agencies also have cafes in their buildings, including as JYP Entertainment’s Soul Cup and Rainbowbridge World’s RBW Lounge, but be sure to check out their websites before you go for their hours.

The MBC World Munhwa Broadcasting Corp. Theme Park located in Sangam-dong, western Seoul, is the first theme park created by a broadcaster and offers K-drama fans a chance to look behind the scenes of MBC’s top shows from the past to the present. You can check out photographs and handprints of your favorite stars, learn the history of MBC and much more. Dress lightly, because you can also try on costumes and take photos as well.

There are guided tours everyday. Reservations can be made online and over the phone. Tickets cost 18,000 won ($15) for adults, 13,000 won for middle and high school students and 9,000 won for children.