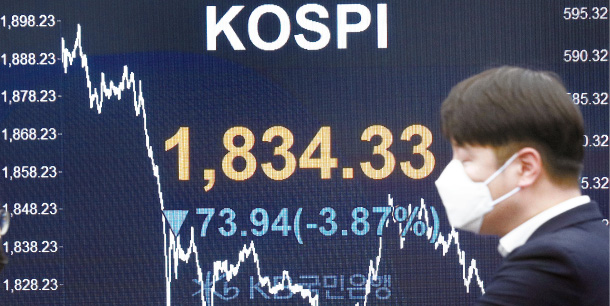 An electronic board at KB Kookmin Bank’s Yeouido branch in western Seoul shows the Kospi market’s Thursday close at 1,834.33 points, down 73.94 points from the previous session. [NEWS1]

The Korea Exchange halted trading in Kospi stocks for the first time in nearly nine years as panic selling hit indexes for another day globally on concerns about the coronavirus outbreak and its lasting economic impact.

The halt came just days after trading in the U.S. markets was suspended for 15 minutes Monday following a 7 percent fall in the S&P 500.

The Korea Exchange’s Thursday maneuver is called a sidecar.

Under local rules, trading is halted for five minutes if Kospi 200 index futures move more than 5 percent for more than one minute. Like the U.S. circuit breakers on Monday, a sidecar is designed to reduce volatility.

The sidecar was activated at 1:04 p.m. Thursday as Kospi 200 index futures dropped by 5.06 percent and stayed there the requisite minute. The Korea Exchange suspended the trading from 1:04 p.m. to 1:09 p.m.

The last sidecar for Kospi stocks was triggered eight years and five months ago. It was first implemented in Korean share trading in 1996.

Korean stocks started Thursday only slightly lower despite the coronavirus outbreak being upgraded by the World Health Organization (WHO) to a pandemic.

He was seen as offering no clear direction forward, while investor anxiety intensified after he announced a ban on travel from Europe to the United States for 30 days starting today.

The announcement led to a sharp and sudden drop in U.S. futures.

Earlier in the day, Wall Street’s 11-year bull run came to an end when the Dow Jones Industrial Average closed down more than 20 percent from its high after the WHO finally declared the outbreak a pandemic.

“Trump’s announcement resorted to talking about theoretical things, disappointing the market, which was expecting a strong stance and detailed plans on a fiscal stimulus,” said Cho Yeon-joo, analyst from NH Securities.

“The market’s trend in the future will depend on the U.S. Congress approving the details of the fiscal policy vaguely laid out by Trump.”

“Covid-19 disrupted the supply chain at first but now expanded into a pandemic and is triggering talks of a financial crisis,” said Park So-yeon, a researcher at KTB Investment & Securities.

“If the virus extends to a level where it causes credit risk, the return on equity rate in Korea could fall to as low as 6 percent, and the Kospi will fall to a 1,700 level.”