Hanwha Eagles’ Jung Jin-ho is focusing on adjusting and progressing

Hanwha Eagles’ Jung Jin-ho is focusing on adjusting and progressing

After seven seasons of playing for the Doosan Bears, outfielder Jung Jin-ho is preparing for his 2020 season in a different uniform.

Jung joined the Hanwha Eagles after the 2019 season, through a second-round draft. Due to tough competition in the Bears’ outfield, Jung was not guaranteed a spot in the defending champion’s starting lineup, but his name was always mentioned as an athlete with enough talent to be playing full time.

Since the Bears are considered to have the best outfielders in the KBO, he was always considered a backup, but he’s still left a strong impression on the fans as he is the first-ever player in the KBO to complete a cycling hit before the fifth inning and has had two inside-the-park home runs.

While his 2019 season wasn’t too impressive — he finished with a 0.208 batting average with 20 hits throughout 66 games — with the Eagles, Jung is hoping to make a comeback.

Throughout spring training, he was competing for the Eagles’ last spot in the outfield, left, against nine other players. Although it is still uncertain as to whether he will be able to get his name added onto the Eagles’ starting lineup this season, he is keeping calm.
Below are edited excerpts of Jung’s interview with Ilgan Sports. 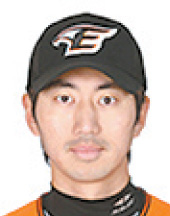 Q. You got to join the Eagles rather unexpectedly. How are you adjusting to the new club?

A. I think I’m still in the process of adjusting. But I feel good because I think I’ve made some progress. [During the second round draft] I kind of expected to go to another team. Hanwha was one of the teams I was expecting, so when I first heard about my transfer, I was just calm about it.

The Eagles fans seemed happy that you were selected and the club seemed to be satisfied with their decision. Would you agree?

I’m not sure. They may have been welcoming the addition of Lee Hae-chang [catcher from the KT Wiz] instead of me. But I’m happy to hear about that at least now. Joining Hanwha can be seen as a new opportunity so I am having more positive thoughts.

It was reported that the Eagles had some serious competition for the remaining spot in the outfield. Did you feel that yourself, too?
I think so. There were a lot of people, and of those people, there are a lot of great players. We don’t know who’s ahead or who’s falling behind yet. We’ll need more time to figure that out.

During the end of the season training last year, you said you wanted to continue this great feel for batting. Were you able to continue that throughout spring training?

Well, batting isn’t that easy. No matter how good I am, it drops all of a sudden, and once I drop, it just gets better all of a sudden as well. I think I’ve been going back and forth [with this inconsistency]. But the problem is that during spring training, I didn’t get to see my high, yet. I want to translate that as now, I have nowhere [to go] but up. I’ll think positively.

Is there a player you were close to from the Eagles before you joined the team?

To be honest, I didn’t have any player that I was “really close to.” But I got along with some of them and I am in the process of getting closer to other players. I shared a room with Lee Dong-hun [who is also competing for a spot in the outfield], he is really nice so we got along well. Honestly, I haven’t completely adjusted to the team, and since I’m not playing baseball very well, I’ve lost my confidence a little bit. I would have adjusted quicker if I played better. But since there are a lot of new players on Hanwha this year, I got to get along with them.

Is it taking yourself longer than you expected to get up to pace for the season?

You normally try this and that throughout spring training, but this time I feel like I was just heading in one direction, without looking for other things. But I’ve been getting a lot of advice from coaches, so I’ve been trying things out and I’m slowly finding my way. I hope to find it soon and believe that it’ll get better.