No rest for Wibee despite suspension of season

No rest for Wibee despite suspension of season 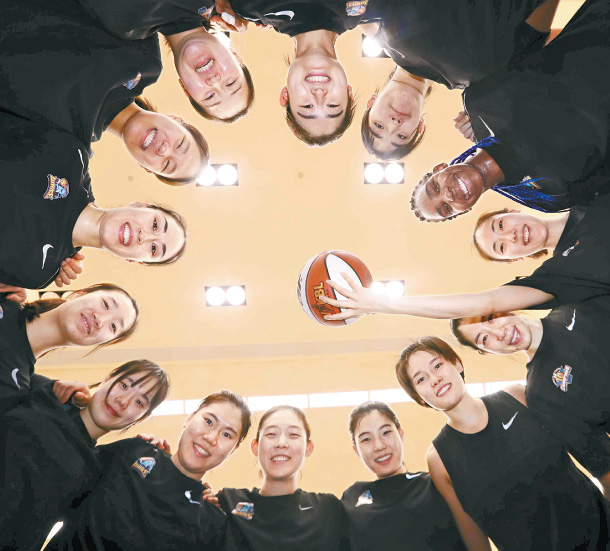 Despite an unexpected break from the season due to the coronavirus, the Asan Woori Bank Wibee players are working even harder to redeem themselves from their loss last year. [KIM SANG-SEON]

While the Women’s Korean Basketball League (WKBL) announced a two-week break from continuing the regular season, rest is not an option for the Asan Woori Bank Wibee.

As the league started its break leaving the Wibee one game away from winning the regular season title, they are working harder than ever to pick up that final victory once the season is resumed. Despite the two weeks off due to the coronavirus, the Wibee’s training ground — both on the court and in the gym — is filled with the sounds of basketballs bouncing off the floor and the players giving it their all.

Just 10 minutes into training, the players were covered in sweat — but the moment they slowed down, the Wibee’s head coach Wie Sung-woo would yell at them to get back in the action. Despite the WKBL’s decision to take a break because of the virus scare, the Wibee is still training three times a day.

Currently, the Wibee are at the top of the regular season standings, 1.5 games ahead of defending champions, the Cheongju KB Stars. As of the latest update, the Wibee picked up 21 wins and six losses with a 0.778 winning percentage.

Each team has about two to three matches remaining in the 2019-20 regular season. Although the league is nearing its end, the Wibee is maintaining their intense training schedule with the sole goal of winning.

Of the Wibee’s three remaining matches, they only needed to win one to secure their regular season title. But right when they were about to touch the trophy, the league stopped.

“If the league stopped after we secured our win, we would have felt a lot more comfortable,” said the Wibee captain Park Hye-jin. “The important thing right now is not to get loose and keep ourselves competitive.”

“We’ve won before, and I know how tough the process is,” said Wibee forward Choi Eun-sil. “We’ll never get loose. But it does suck to train for two additional weeks that were not on the schedule.”

This season, the Wibee are more desperate for the regular season title than ever, after quite the disappointment last season. Up until the 2017-18 season, Wibee were the absolute dominant team in the WKBL, winning both the regular season and the championship for seven straight seasons.

Wibee’s hopes of extending its winning streak to eight last season were dashed after an upset defeat to the KB Stars.

They ended up finishing second in the regular season, and in the playoffs the team failed to advance to the championships after losing to the Yongin Samsung Life Blueminx.

But the Wibee defied expectations, using the disappointment as motivation to become a stronger team.

“We’ve settled with a system where we can keep playing at our best even with the absence of one or two players,” Wie said. “Experienced players like Kim Jung-eun and Park Hye-jin played a lot and led the team. And we had some luck as well. Players say that the training is intense, but it’s not because we’re heading toward the end of the season.”

While Wie is keeping the players physically ready for that one last win, he emphasized that it’s more important for the players to not get careless psychologically.

Of the Wibee’s starting players, Park Ji-hyun, is the only one who doesn’t have a championship win.

“We’ll make our last minute spurt and win both the regular season and the championships,” Park said. “According to what our senior players said, it feels really great to win. Hopefully I can feel that too.”

As for the training, Sonia Kim said that the team doesn’t expect to rest as they are well aware of Wie’s style. However, the players are not complaining. Rather, they are determined to work harder during this time so they can be the ones smiling when the season ends.

“For players whose goal isn’t to win the title, they can rest as much as they want,” Wie said. “They would know what to do even if I don’t say anything. Winning the regular season isn’t the end. We have to prepare for the actual fight [postseason] after it. We will use most of our time in practice and team analysis.”