A tteokbokki, or Korean-style spicy rice cake, restaurant near Gyeonghui Palace, Jongno District in central Seoul, sits empty last Friday afternoon. The owner told the JoongAng Ilbo she’s worried about having to close her 17-year-old business after the number of customers plummeted from the coronavirus outbreak. [LEE GA-RAM]

For small businesses, especially those owned and run by an individual, the coronavirus outbreak has caused more than a recession. The decline has hit depression levels, with sales down an estimated 80 percent.

And their loss is becoming the country’s loss, as one of the most important and vibrant layers of the economy has all but vanished in a matter of weeks.

Lee Soo-in, 37, an owner of a Korean food restaurant in Mok-dong, Yangcheon District in western Seoul, says she is worried about paying the bills. Her profit decreased to a fifth of the average, as customers avoid coming to dine at her place as they participate in social distancing.

Her restaurant used to run around the clock, with five part-time workers employed. Lee had to adjust operating hours, opening at 10 a.m. and closing at 11 p.m., as profits started to drop from the slowing in the economy and the increase in minimum wage. She eventually let two of her workers go.

Now, with the coronavirus outbreak, she closes her restaurant every Sunday. Only one part-time worker is left.

The situation is so dire that Lee is struggling to pay back interest on the loan she took out to open her business.

“I do not make enough money to buy ingredients from the franchise headquarters, and I am struggling to pay rent. I am suffering from depression and insomnia, and it’s starting to cause friction between my family members,” Lee said. “Although the government is coming up with emergency measures, most are low-interest loans that do not provide any fundamental help.”

The Federation of Small Businesses estimates that the average sales of self-employed businesses have decreased close to 80 percent. In the virus hot zone of Daegu, sales may have declined more. 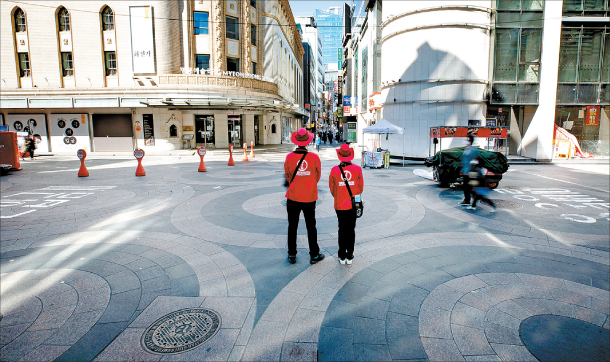 Even university districts, which usually bustle with students around the spring season, were dead quiet after classes were moved online to prevent the spread of the coronavirus.

When the JoongAng Ilbo visited the commercial areas near Hankuk University of Foreign Studies over the weekend, Kim Dong-gun, 29, said his board game cafe has been sitting empty since it opened at 1 p.m. He said his income has dropped by two-thirds compared with the same time last year. He had to lay off most of his part-time workers. Those remaining have had their hours cut.

Kim is basically the only person working in his store.

The situation is also grim for the 56-year-old Choi Kyoung-jin, who runs a flower shop nearby.

No one has bought flowers from her shop after university graduation and admission ceremonies were canceled because of the coronavirus.

“I was expecting customers would buy flowers from my shop on White Day, but it was empty as usual,” Kim said, referring the March 14 holiday.

Tourist areas like Insa-dong in Jongno District, central Seoul, have not been spared as the government strengthened quarantine measures.

A pottery shop in Insa-dong now sells other items like clothes and kitchen equipment, to make up for the drop in sales.

The proprietor used to only sell pottery at his shop when he first started business 15 years ago. He started adding hats and T-shirts to his shelves after the Middle East respiratory syndrome swept Korea in 2015. Now, with the coronavirus, he offers dish sponges and artistic handicrafts for sale.

Fortunately, the bric-a-brac helps him get by.

The proprietor was able to make 10,000 won ($7.90) on Sunday by selling two pair of pants and 5,000 won the previous day from a hat. To his relief, the building owner waived his rent for the month.

“I thought of closing my shop temporarily. But there’s no other work I can do right now at a time when even part-time servers are losing their jobs,” he said.

Kim Mi-kyoung, a 56-year-old tteokbokki, or Korean-style spicy rice cake, restaurant owner, is worried that she might have to close her 17-year-old business.

While her restaurant in Gyeonghui Palace, Jongno District, used to attract an average of 50 to 60 customers everyday, now fewer than 10 customers show up at her shop during lunch hours.

“I used to sell tteokbokki at a different place for 17 years but fled here from the expensive rent. It’s been less than a year since I started business here, but I might have to close my shop because of the coronavirus,” she said.

Some business owners say that the economic impact of the coronavirus outbreak may even be worse than the financial crisis Korea experienced in 1997-98.

A 60-year-old owner of a sports equipment shop said he was able to overcome the financial crisis back in the 90s, but he’s not sure if he can make it through this time.

“Even though I want to close my business, I can’t find a way to get rid of the expensive equipment collecting dust on the shelves,” he said.

Experts are concerned that the damage may go beyond the financial damage and even have a negative impact on the mental health of the self-employed population. Research published last Thursday by Seoul National University (SNU) showed that the “daily activity suspension” of self-employed people is at a seriously low level.

On a scale from zero to 100, with zero meaning that daily activity has completely stopped, the self-employed came in at 41.3.

“We need to look after the psychological health of the most vulnerable class and help them reconnect to society,” said You Myoung-soon, the head researcher and an associate professor of public health science at SNU.

“When such efforts are combined with disinfection measures, it will enhance our ability to manage the crisis from an unknown disease.”