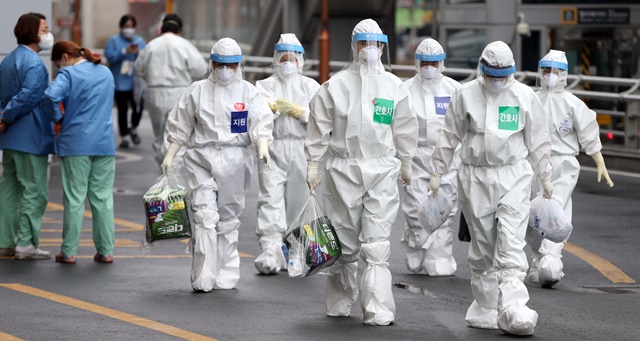 A new cluster of novel coronavirus infections has been reported at a hospital in the southeastern city of Daegu that shared a building with a virus-hit nursing home, the local health agency said Friday.

A total of 52 people, including 50 patients, at the general hospital have tested positive for Covid-19, according to officials from Daegu, the epicenter of the outbreak here.
Three showed symptoms last week, with one of them testing positive.

Authorities said 49 others from the hospital are awaiting their virus test results, raising concerns that more cases may be confirmed.

The new cluster of infections came after Daesil Nursing Hospital, located on different floors of the same building, reported infections last week. As of Thursday, there were 78 cases from the nursing hospital.

Although Korea saw a slight decline in new coronavirus cases Friday, cluster infections continued to emerge amid a rise in cases involving arrivals from overseas.

The 91 new cases, which were detected Thursday and down from 104 new cases on Wednesday, marked the 16th consecutive day that there were around 100 or fewer additional cases, according to the Korea Centers for Disease Control and Prevention (KCDC). There were 9,332 confirmed cases in total and the death toll rose by eight to 139.

The number of imported cases climbed by 13 to reach 144, the KCDC said.

Seoul, Incheon and Gyeonggi, which surrounds the capital city, saw their new daily infections rise by 26 to 830 Thursday.

Citizens are strongly urged to stay at home, except for essential needs or going to work, with the government restricting religious gatherings, indoor sports activities and visits to nightclubs and other entertainment venues.
Korea has enforced a two-week quarantine period and virus tests for all long-term arrivals from Europe, regardless of symptoms, in an effort to contain imported virus cases. Starting Friday, passengers from the U.S. for long-term stay are required to self-isolate at home for two weeks.

Yoon Tae-ho, a senior health ministry official, said about 40 people have violated rules on self-isolation so far, calling for people coming from abroad to strictly comply with the rules.

Korea has vowed a "no-tolerance" policy in dealing with violators. Those who are Korean nationals will face lawsuits and foreigners will be expelled.

Travelers from Europe and the United States are advised to use their own cars when returning home. If they do not own cars, the government will arrange for them to be transported via buses and trains, Yoon said.