Is the law the problem?

Is the law the problem? 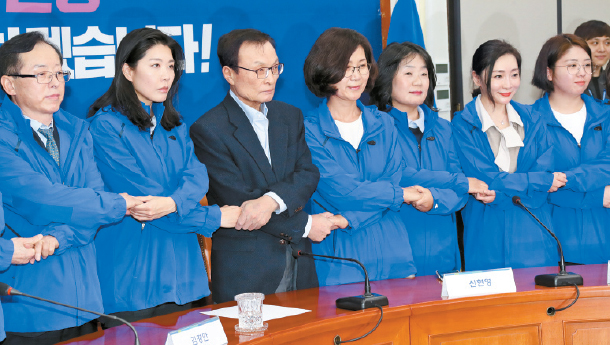 Lee Hae-chan, center, chairman of the ruling Democratic Party (DP), shakes hands Thursday with candidates for proportional seats in the National Assembly from the Citizen Party, a satellite of DP, ahead of the April 15 parliamentary elections. [BYUN SUN-GOO]

LEE DONG-HYUN
The author is the deputy editor of industry 1 team of the JoongAng Ilbo.

Marcus Tullius Cicero compiled the universal principles of Roman law, the basis of Western modern law. In “De Legibus” (On the Laws), he wrote, “Salus populi suprema lex esto,” which means “The health of the people should be the supreme law.”

Roman law gained the spirit of justice from Cicero. The modern enlightenment and the philosophy of natural law are also his legacy. It means that the principle to believe that human nature is right is higher than the law made by humans and that the law needed to be just.
But Cicero himself did not practice his philosophy. While he is praised as a lawyer and philosopher who took Roman law to another level, he impeached Catilina through a means beyond the law. When he was accused four years later, he fled using a legal loophole.

As the wealth accumulated in Western society after the Renaissance, Roman law was highlighted again, mostly to define the property rights of the church, kings and aristocrats. The spirit of the law was to protect people’s rights, but it was abused. When Spain established colonies in the 16th century, the infringement of native people’s property rights became controversial. The church and the royal family argued that refusing free travel was against natural law and that property was based on civic community and society, which the native community did not establish, therefore they could not claim property rights.

After hundreds of years of trial and error, modern law was completed. It is still far from the definition of the natural law, but the laws of the countries with a long history of democracy don’t differ much. While they may have different legal systems, consensus close to natural law is created through precedents and agreements in a civic society.

I am convinced by the argument for the new proportional representation system in Korea because the existing “winner-takes-all” system could be against representative democracy. But as I watch the current state of a number of “satellite parties,” whose origins are unknown, I came to a conclusion that the fault does not lie with the law but with the people who abuse the law.

I sometimes read the Constitution of the Republic of Korea, which is made of beautiful and noble words. But I don’t know why the comedy is repeated despite the constitution.