Where’s the beef? You don’t want to know

Where’s the beef? You don’t want to know 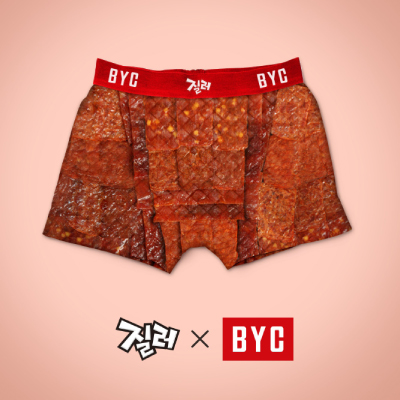 Food company Sempio was apparently serious when it said it was giving out 30 pairs of beef jerky boxer shorts as an April Fool’s joke.

The meat undergarments, created in collaboration with Korea’s oldest underwear maker BYC, will be awarded to the winners of an ongoing Facebook and Instagram event challenging participants to upload stories explaining why they deserve the underwear-shaped slabs of meat. Sempio will choose the winners after the competition ends Friday.

The boxer shorts consist of an elastic band attached to fabric made from dehydrated beef which has been “heavily soaked in barbecue sauce.”

Despite the lack of ventilation, the food company boasted that the underwear “can fill empty stomachs during the day.”

Sempio also advised against getting into bed wearing the special shorts, as “the sheets will smell of barbecue sauce.”

BYC had participated in the design, and its logo appears on the elastic on the top. The product is similar in size to the traditional, non-meat variety. Originally known as Baik Yang Company, the underwear maker is now 74 years old.

Sempio said it will consider releasing the jerky boxers more widely based on customer reactions to the trial run.

Some past products released as April Fool’s jokes have attained permanence on Korean store shelves. The sauce for Paldo’s instant ramen Paldo Bibimmyeon started being sold by the bottle in 2019 after the food company uploaded an April Fool’s joke on Facebook that the long-requested sauce bottle would be released soon.