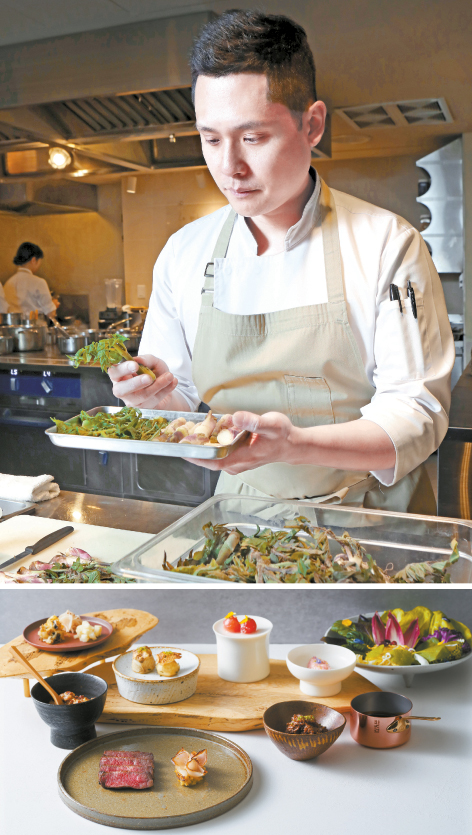 From the top: Chef Allen Suh of L’Impression, who is also known by his Korean name Hyun-min, prepares dureup, a well-known spring vegetable in Korea, for service; a collection of dishes served alongside the main meat dish. [PARK SANG-MOON, L’IMPRESSION]

Since traveling overseas to try new dishes isn’t an option for foodies these days, many are looking for spots that can provide them what they’re craving without needing to hop on a plane.

Chef Allen Suh’s Michelin two-star restaurant L’Impression is where those who miss their time in New York and San Francisco, where he spent most of his time cultivating his culinary craft, can find some familiar dishes. He garnered a lot of attention when he opened his restaurant in 2018 after leaving his position as a sous-chef at New York City’s Eleven Madison Park, one of the top restaurants in the city.

While what’s served at L’Impression may feel foreign to most local diners, the setting is familiar thanks to his efforts to include traditional Korean elements as part of the restaurant’s decor. The lights hanging on the wall resemble ones found in traditional Korean homes, and the black and white cushioned pads alongside the wall look like traditional folding screens that often include nature scenes including birds, clouds and mountains.

Even the flower vases placed on each table are shaped like the famous moon jar, showing how what’s considered contemporary Western can shine in a setting that’s distinctly Korean.

“I can’t cook Korean food well at the moment, but I wanted to show other cultural aspects of Korea at the restaurant,” said Suh, who worked with the restaurant’s interior designer and showed them reference photos he collected to create the ambience.

The chef spent most of his culinary career cooking French and contemporary American at Michelin-starred restaurants, as well as Japanese cuisine when he ran his own restaurants in the San Francisco area. He was never educated at a cooking school but was introduced to the food industry when he went on school field trips to restaurants and hotels while studying hotel management in Las Vegas.

Although Suh can’t cook Korean staples like doenjang jjigae to the level that storied restaurants throughout the country can, he has been studying how he can use all kinds of local ingredients that he never used during his time in the United States. Thankfully, he had about a year to explore Korea and the dining habits of locals to learn what he should do more of and what not to do.

He started doing research online about seasonal produce and then headed out to markets and farms to see what was available in person. He found answers in books explaining the characteristics of foods from each region in Korea, including Gyeongsang and Jeolla.

Suh tries to invite all the people that source his ingredients to the restaurant so that farmers, butchers and fishermen know how their products are being transformed.

“Before I accumulated my own database that I have now, I really felt lost,” said the chef, adding that he is more comfortable now after spending all four seasons creating dishes for the restaurant.

It was extra stressful for him because he creates different dishes for lunch and dinner, a strategy unlike most restaurants which use some of the dinner course plates for lunch dishes. The team for lunch comes in early in the morning and goes home right after the lunch service. The dinner team comes in soon after to prep that day’s dishes in order to keep all the ingredients as fresh as possible before they are served. To give his staff more inspiration, he writes down sayings from well-known chefs in the kitchen, as well as specially made cutting boards with two Michelin stars on them, to constantly remind them to be proud of what they do.

“In Korea, working in the kitchen as a chef and working in the hall as a manager or sommelier have been considered not very prestigious jobs, so the first thing I wanted to do was to give them higher self-confidence and self-esteem,” said Suh.

He is not in a hurry to make things happen overnight. He takes the first step to encourage drink pairing to show local diners shy about ordering beverages how the overall dining experience can be better if they do. The drink pairing usually includes wine and traditional Korean drinks, and the sommelier often serves drinks without revealing what it is in the beginning to add more fun and encourage communication between the staff and guests.

To better interact with diners, he recently also participated in making “Ode to San Francisco” with fellow chef Son Jong-won of L’Amant Secret at L’Escape Hotel in central Seoul, to present food from the Californian city with a twist. As the theme spoke to many who enjoyed the experience, he now would like to do a version called “Ode to New York.”