Explosion in jobless claims is just the beginning

Explosion in jobless claims is just the beginning 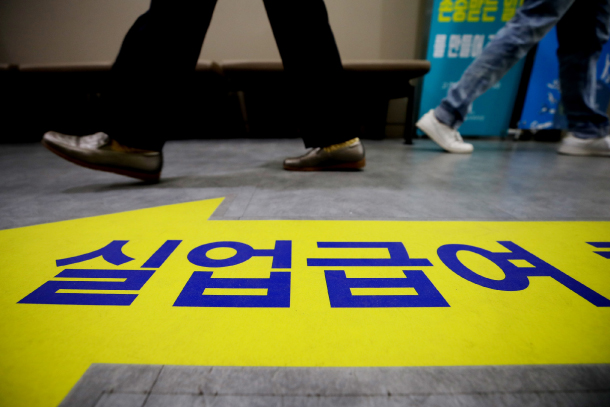 A sign on the floor directs those that have recently lost their jobs to the counter where they can receive unemployment counseling at an employment welfare plus center in Mapo District, western Seoul, on Tuesday. [YONHAP]

The coronavirus outbreak is already developing into one of the worst unemployment crises in the history of Korea, with an estimated 6,000 workers currently losing their jobs each day.

The number of new unemployment claims soared by 53 percent last month compared with March 2019, according to estimates from the Ministry of Employment and Labor. And the most extensive shocks to the real economy are likely yet to come, with unemployment expected to peak between April and May.

An estimated 191,000 people applied for unemployment benefits in March, an on-year increase of about 66,000. From January through April 1, 455,800 unemployment claims were filed, a 19.9 percent increase compared to the same period last year.

Both the actual number and the rate of increase in March are higher than any other time since 2009, when the government started keeping track of the relevant statistics.

“Unemployment statistics are usually reflected a month or two in the future, so we predict the situation will worsen between April and May,” said a Labor Ministry official who requested anonymity to speak frankly. “We are especially scared of what would happen in May.”

The largest spike in jobless claims previously had been in January 2018, when 37,000 more applicants sought unemployment benefits compared with one year earlier. Those job losses were largely attributed to a 16.4 percent hike in the minimum wage.

But that historic one-month increase still fell short of the average jump in jobless claims for every single week last month.

In the first two weeks of March, 86,827 people filed unemployment applications with the government. In the third week, another 47,547 jobless claims rolled in, followed by 38,919 in the final week.

18,789 newly unemployed people applied to receive benefits in the three days from March 30 to April 1.

While those numbers are preliminary estimates added up from daily updates provided by regional unemployment centers, government officials say they’re certain unemployment is growing at an “exponential speed.”

The average number of daily job losses is equivalent to the workforce of some of the country’s most visible chaebol affiliates. SK Telecom has about 5,400 employees. Amorepacific, Korea’s top cosmetics company, has close to 6,000 employees and Korea Land & Housing Corporation has more than 6,400 workers on its payroll.

The fresh unemployment numbers do not include people who are on indefinite leave and not working. Employees of temporarily closed businesses or those stationed at home from unpaid leave are ineligible for jobless benefits because they are still considered “employed” by the company on paper.

This is different from other countries that consider such employees as “temporarily unemployed” and provide government subsidies.

As of Monday, 390,000 workers in Korea fall into this category, a sign the government’s estimates may significantly undercount the actual number of unemployed people.

Even with such dismal numbers, the consensus among industry experts is that peak unemployment numbers remain to be seen.

On April 2, 7,942 people newly applied for unemployment benefits, which were already 30 percent higher than the daily average for the previous month.

Government officials say that the situation is a ticking time bomb, which may explode amid major restructuring within large conglomerates and mid-sized businesses. While those businesses have announced restructuring plans, few have carried them out.

Only 3 percent out of 40,606 businesses with more than 300 employees have said they will retain their current workforce.

“If more people are left out of the job market from hiring adjustments made by companies, it will weaken the resilience of our economy and the labor market after the coronavirus outbreak,” Minister Lee said. “We ask both the laborers and corporate officials to work together to maintain the current workforce as much as possible.”