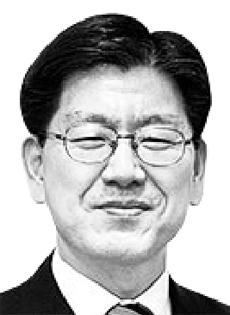 Park Myung-lim
The author is a professor at the Graduate School of Area Studies in Yonsei University and director of the Kim Dae-jung Presidential Library and Museum.

Where is our humanity and where is it headed? In current times, it is difficult to have long-term expectations and optimism — which had consoled us and helped us overcome short-term pain and pessimism during crises — because the coronavirus outbreak has simultaneously shown us how immense the size of an impersonal problem can grow and how incompetent we humans can be as a group.

The first issue we are dealing with today is the relationship between humans and nature. When humans try to artificially change the order of nature, the retaliations of nature can be terrifying. If humans continue to exploit nature for their own benefit by destroying animal habitats and causing global warming, nature will oppress humans even more severely. That’s a well-earned punishment for humanity.

Despite advanced technology, humans have always struggled in their response to infectious diseases, which is why creating harmony between the absoluteness of nature and limitation of humanity is important. If humans continue to act incompetently as a group while destroying the ecosystem, it will only advance the self-destruction of humanity. To prevent such an apocalyptic scenario and save the homes of us and our children, we must all play our role and meet our obligations as members of this world of 7 billion people.

Our second issue has to do with international liability. First and foremost, China is to blame for concealing information about the coronavirus and delaying their report about the disease to the World Health Organization, as per the International Health Regulations adopted in 2005. Britain recently chastised China for its handling of the crisis, saying it risks becoming a “pariah state.” From both a negative and positive view point, the world must conduct in-depth research on the so-called China era by looking into its multiple facets of population, trade, production, consumption, environment, tourism, diseases and national security.

But another serious problem with the outbreak was how international society, including the United States and Europe, wasted much time after the first huge cluster was discovered in the Chinese city of Wuhan. Countries must look back at their early responses to the outbreak and think whether racism had kicked in. One thing worth paying attention to is the fact that many advanced countries which had the upper hand in world development and provided the very reason for global structural problems — while simultaneously providing solutions to the problems — failed to prevent the spread of the disease.

Western countries initially called it the “Wuhan virus,” but now they’re looking to Asia for lessons in containing their outbreaks, including Korea, Singapore, Taiwan and Hong Kong.

Such behavior not only indicates a swift change in their thoughts about the virus but also a keen distinction between China and the rest of Asia. In light of the fact that the Group of 7 countries are failing to cooperate with each other amid this pandemic, and given they all failed in their preventive measures against the contagion, it is time to seriously consider a new international organization in the post-Covid-19 era — perhaps a “Group of 9” that includes Korea and Australia.

The trilateral relationship among the world, society and individuals is most important. The core problem lies in the relationship between data privacy and the protection of personal information versus public health systems and health services, and how they harmonize or clash. That is a fundamental issue of public versus private, individual versus society. We are now living at a time when big data may become the “Big Brother,” a time when the former is directly controlling the latter as we experience a global crisis directly connected to individual safety.

In the field of public health, we call in the “panopticon,” or a central monitoring system. Then, there’s the concept of “solocracy,” rule by self. The two contradictory systems have appeared simultaneously. Western liberal states failed in their early stages to prevent the spread of the disease largely due to their emphasis on the values of individual freedom, protection of privacy and human rights. In contrast, Asian countries relatively succeeded in curbing their outbreaks by prioritizing public health and safety. During an urgent situation, it is unavoidable to be subject to surveillance to protect your own life and the lives of others.

The juxtaposition of the panopticon and the solocracy must not continue after this crisis ends. Now is an exceptional case, in which wartime rhetoric and laws and measures are gripping the entire world and suppressing normal democracy. People must be keenly aware of the regression of global universalism and democracy, which started even before the coronavirus pandemic.

The World Health Organization estimated 7 million people to have died in 2012 due to air pollution, mainly in low-income or developing countries. As people around the world all currently lock their gazes upon developed countries since they’re dealing with the worst coronavirus outbreaks, what’s desperately needed is for people to show universalism in approaching the issue of air pollution deaths in the same context of protecting human lives.

Neither global panopticon nor solocracy will work. People should express the same amount of love for all living creatures wherever they are.

If we fail to do so, at a time when everything and everyone is interconnected, humanity won’t be able to stop its march toward the apocalypse — or worse, the process will be hastened for sure.