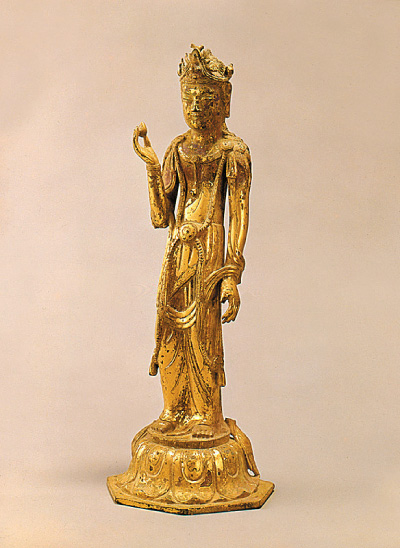 It was found at what is believed to be a temple site, judging from various roofing tiles and earthenware of the Three Kingdoms period (57 B.C.-A.D. 668) also found there. The Buddha is in a natural, relaxed standing position, with the right knee bent slightly, and its head is crowned by the ushnisha, with a tiny Buddha carved in the front. Its face is somewhat round and wears a benign smile. Its body is relatively slim and well-balanced, while its robe clings to its body. The robe, gently covering the right hand, hangs down to the knee, gently covering the left hand, and comes all the way down to the pedestal.

This statue also shows Buddha wearing a necklace, with bead ornaments hanging down to form an “X” shape from its shoulders. The robe folds and the “X” shaped bead ornaments are depicted also at the back of the Buddha.

A square pedestal is carved with lotus leaves facing the ground. Although its face and right hands became rusty, the original gilt still remains in a relatively good shape. With a well-balanced body and great carving skill, this Buddha statue represents the typical style of the late Three Kingdoms period. It seems to have been made in the mid-seventh century.