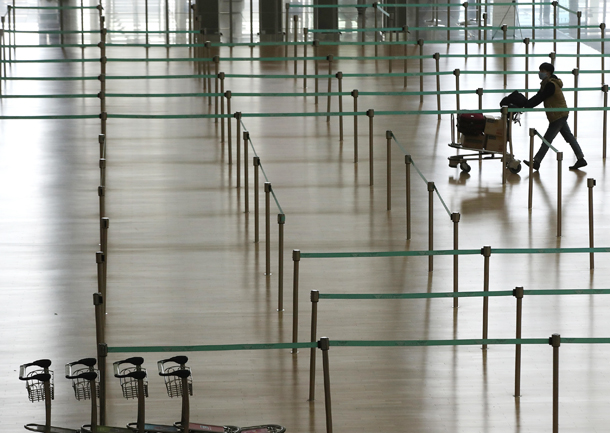 Incheon International Airport’s Terminal 1 sits nearly empty on Tuesday, with most international flights grounded as countries have restricted visitors or are enforcing stay-at-home policies to counter the coronavirus pandemic. [YONHAP]

Despite an upcoming long weekend for many Koreans as Buddha’s Birthday and Children’s Day near, the hard-hit travel industry doesn’t expect any relief as trip reservations have dwindled to nearly-zero amid the coronavirus pandemic.

Reservation rates for Hanatour and Modetour, Korea’s top two travel agencies, fell more than 99 percent in April and May compared to the same period last year.

Even for the upcoming holidays, there have been few new reservations. Buddha’s Birthday falls on April 30, and Children’s Day is on May 5.

“There are no cancellations for overseas trips anymore because there were no reservations in the first place,” an official from the travel industry said. “Most customers have already canceled their trips and there are no flights that can go abroad, so we are not expecting a peak season for this spring.”

This year has the fewest number of public holidays in five years, and there are six months without any public holidays, because Independence Movement Day, Memorial Day, National Liberation Day and National Foundation Day all fell on weekends. This year’s Lunar New Year holiday was only four days because it also fell on a weekend.

As such, the travel industry has regarded the long weekend in May, in which up to six days off from work is possible, as the only chance for a rebound in this year’s performance. There will be no significant holidays after that until the Chuseok harvest holiday in September.

Large agencies are squeezing water out of a dry towel by cutting the workweek down to three days and taking paid and unpaid leave, but small travel agencies have started to shut down entirely.

According to travel data from the Korea Association of Travel Agents, the number of domestic and foreign travel agencies that reported closures to local governments increased to 192 as of last Friday since Jan. 20, when the first infection from the novel coronavirus was confirmed in Korea.

The amount of losses from the cancellation of reservations by the end of February is over 500 billion won ($411 million), according to a survey conducted by the travel association.

The situation grew even grimmer last month, as there were nearly zero overseas trips.

“In Korea, the spread of coronavirus is slowing down, but it is getting worse around the world, so there’s no way out of it,” said a travel industry expert who requested anonymity to speak frankly. “If it continues throughout the summer, the domestic travel industry will be wiped out.”

The coronavirus pandemic has also shocked the hotel industry, with the Korea Hotel Association estimating March losses at 580 billion won due to the sharp drop in reservations.

Luxury hotels have not been spared. Grand Walkerhill Seoul stopped operations for a month on March 23, and Park Hyatt Seoul has also closed its facilities through June 8.

Yet unlike hotels in big cities, Jeju Island’s accommodation reservation rate is improving. As the coronavirus makes it difficult to travel abroad, people are choosing Jeju Island for their getaway trips.

Lotte Hotel said Monday the reservation rate of for Lotte Hotel Jeju has reached 70 percent for the long weekend.

The hotel extended its honeymoon packages through the end of June, and said the reservation rate for those bookings has more than doubled since the end of March.

The Shilla Jeju also said reservations for its “Sweet Honeymoon” package more than triple this month from last month.

“As people refer to Jeju Island as a coronavirus-free area, the number of reservations has increased for the long weekend getaway and honeymoon trips,” a Lotte Hotel official said. “It is good to see how airlines are increasing domestic routes such as Jeju Island … However, it will take much longer for demand to recover, as the social distancing campaign is still in progress.”