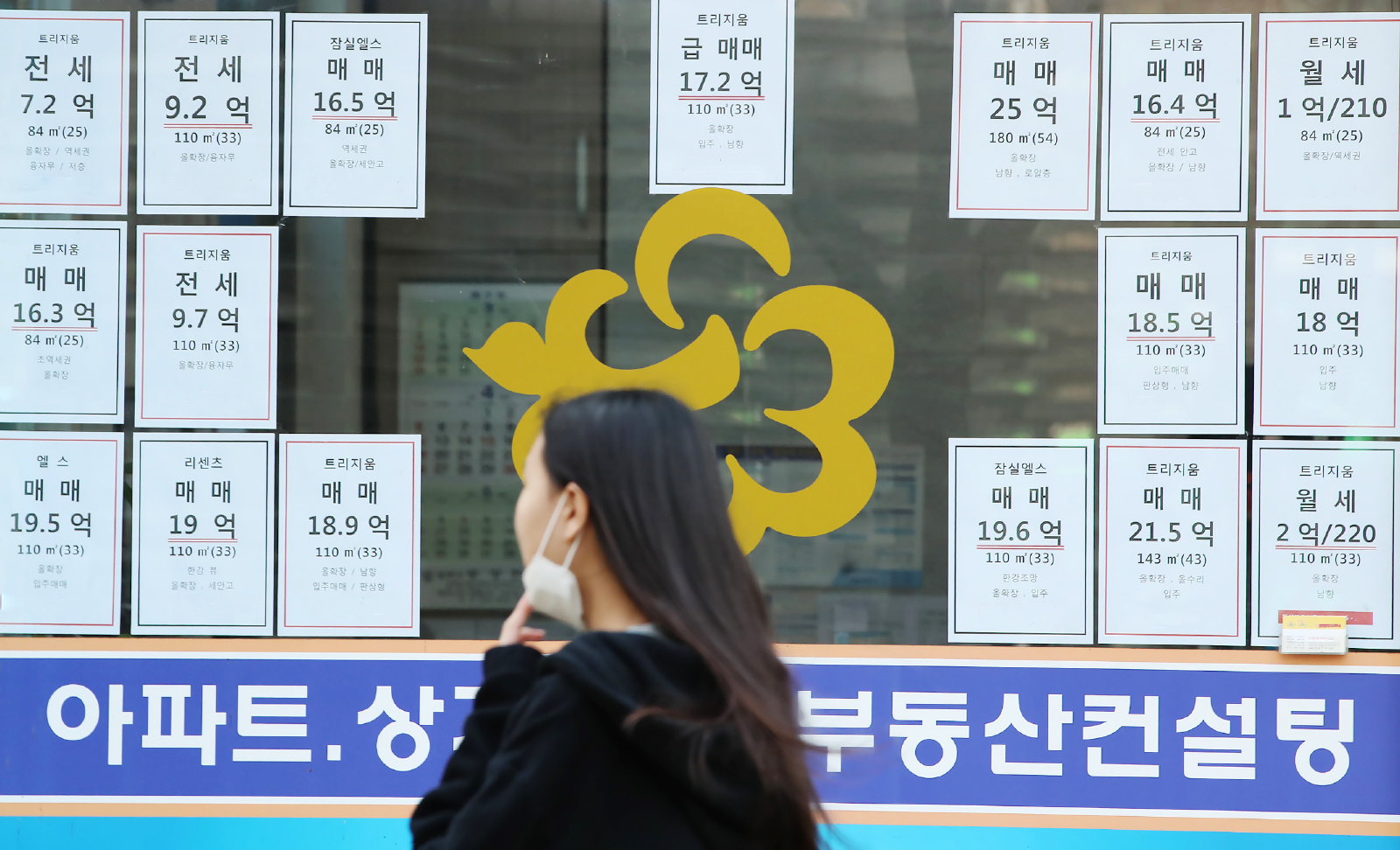 A woman passes by a real estate agency in Jamsil, southern Seoul, on March 31. Jamsil is one of the neighborhoods in Gangnam that expects property taxes, including comprehensive real estate taxes, to rise sharply this year. [YONHAP]

The ruling Democratic Party, now in control of both the Blue House and a majority in the National Assembly after last week’s elections, is expected to move swiftly to reshape real estate policy in Korea.

Lawmakers are expected to soon begin discussing proposals for a comprehensive real estate tax increase, with the goal of passing a bill before the current session ends at the end of May. The quick turnaround would allow the new rules to be applied before the June 1 deadline, when property taxes are levied.

The government is currently proposing increasing the maximum property tax for people who own a single apartment from 2.7 percent to 3 percent. For those with multiple apartments, the tax rate would increase from 3.2 percent to 4 percent.

The government is also pushing to raise the maximum tax that could be levied on owners of two or more apartments in areas it has designated as speculative or overheated. In the case of Seoul, that’s every district.

Earlier this year, the government increased the assessed-value rates to equal 70-80 percent of the market price, for apartments with a market value in excess of 900 million won. The government is expected to propose a further increase in assessed values, bringing them even closer to market rates.

Similarly, land is under-valued in the government’s tax assessments. The Ministry of Land, Infrastructure and Transport has said it plans to raise the assessed value of land from its current rate of 65.5 percent of the market price to 70 percent over the next seven years.

While the recent tax hikes were enacted on Dec. 16, before the coronavirus outbreak, there has been a growing chorus of calls that the government should ease up on the increased tax burden to avoid exacerbating the economic damage of the pandemic. Analysts in recent weeks have increasingly sounded the alarm that Korea’s economy is likely to experience negative growth this year.

The number of property owners that now have to pay comprehensive real estate taxes has increased this year, both in Gangnam’s posh neighborhoods and in Gangbuk District in northern Seoul. The government has specifically targeted what it characterizes as speculation in the Gangnam area.

Lee Nak-yon, a former prime minister who last week won a seat at the National Assembly as a Democratic Party (DP) lawmaker, has promised to ease the burden of the comprehensive real estate tax on single-apartment owners who live in the apartment. One of his DP colleagues, floor leader Lee In-young, has also made similar pledges.

“Unlike the assessed value, which remains unchanged throughout a year, market price constantly changes,” said Rho Tae-ug, real estate professor at Kangnam University. “That’s why in previous administrations they left a wide gap between the assessed value and the market value as a buffer.”

If the government raises assessed values without considering market fluctuations, there could be cases the assessed value could actually exceed the market value when the real estate market falls into stagnation, Rho added.

The DP’s new majority is also likely to give new life to the government’s proposal to build new towns around the greater Seoul area in a bid to increase housing supply and stabilize prices.

Until now, the opposition party has demanded a full re-evaluation of those plans.

The debate over the new towns has been especially heated regarding Goyang, Gyeonggi, which is Land Minister Kim Hyun-mee’s previous constituency. Kim was previously a DP lawmaker representing Goyang.

That district’s opposition party candidate in the recent elections said she would scrap the new town plans, which many residents believe would only contribute to lowering the neighborhoods’ apartment prices. Her opponent from the DP won the seat last week.

The government has also begun pushing to create a ceiling on the sale prices of preconstruction apartments.

Due to the coronavirus, the government suspended the implementation of the ceiling on apartment projects built on private land until the end of July.

The government currently has thus far refused their request.

Another proposed set of regulations would require reporting all rent, whether it’s the long-term housing rent known as jeonse or monthly rent, and would impose a maximum limit on rent.

Last year, DP lawmaker Ahn Ho-young and the Land Ministry introduced a bill that would require every rent payment and its price to be reported to the government within a given period, similar to other housing transactions.

Those proposals, however, are expected to fall through.

Separately, some in the housing market have speculated that the government will restart the discussion around the public concept of land ownership.

The idea posits that the government could intervene or limit the ownership and disposal of lands accordingly to the public interest, granting authorities the power to raises taxes on what they deem excessive land profits.

This concept was first raised during the early stages of President Moon Jae-in’s administration and resurfaced in February after Lee, the DP floor leader, said its adoption would be necessary to fundamentally solve the real estate problem.

With the government preparing for a cornucopia of regulations, some analysts worry it could damage the real estate market at a time when the coronavirus pandemic is depressing demand.

“If the government does not change its course on [housing] policies, the reconstruction market could face further hardship, and with the coronavirus, the real estate market could fall into a deeper recession,” Konkuk University real estate Prof. Shim Gyo-eon.