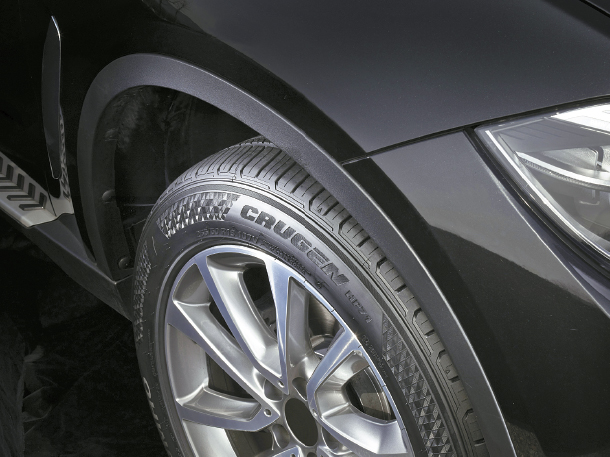 The photo shows the Crugen HP71, one of the main products of Kumho Tire designed for SUVs. [KUMHO TIRE]

Kumho Tire is continuously making efforts to cope with difficulties in the global market. Its aggressive cost-cutting efforts along with a reduction in inventory has increased efficiency which allowed the company to be back in the black in 2019.

Also, its high-quality tires have played a key role in restoring its reputation as a leader in the industry. The Majesty9 Solus TA91, a tire for sedans, and the Crugen HP71, one of the top-tier tires for SUVs, received many positive responses. This led Kumho Tire to rank first in terms of sales in Korea. According to the Korea Tire Manufacturers Association’s report, Kumho Tire sold a total of 6.52 million tires in 2018 which accounted for 40.6 percent in the domestic market.

In addition, Kumho Tire is actively working on its marketing strategy to improve its overall image. Last year, Kumho Tire changed its Youtube channel’s name to “Ecsta TV” and began posting a variety of content. Information about tires, advertisements and video clips of the racing team posted on the channel attracted much attention. As a result, the number of subscribers to the channel increased by 1,200 in just one month, and the total number has now topped 20,000.

Kumho Tire’s consistent relationships with sports teams is also a key part of its marketing strategy. Since 2016, Kumho Tire has been an official global partner for Tottenham Hotspur, a prestigious football club in the English Premier League, and an official sponsor for the NBA in North America. The company also has its own racing team called the Ecsta Racing Team and provides tires for racecars in various motor sports events such as the CJ Logistics Superrace Championship and Hyundai Avante Cup.

Recently, Kumho Tire updated its website to strengthen its reputation in the global market. The new website reorganized categories to make it more convenient for users. The company also consolidated its local and international websites to a single domain, (www.kumhotire.com) and employs a system called Smart Konnect (Kumhotire Connect) that redirects users to the relevant site depending on the region they are accessing it from.

“This year we will focus on stabilizing our brand value and regaining our reputation in the market by enhancing sales capabilities and strengthening our supply chain,” said an official from Kumho Tire. “Though we are facing an unprecedented crisis due to the coronavirus, we will overcome this difficulty just like we have done in the past.”