GS Engineering and Construction announced Monday it has signed a 550 billion won ($491 million) deal to build a train testing center in Singapore.

The “integrated train testing center” will use three test tracks to test various functions used on railways, including traffic signs and telecommunications technology. The land was previously used as a golf course. 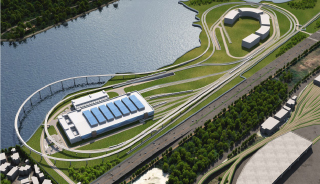 An aerial view of Singapore’s integrated train testing center. The center is scheduled to open by 2024. [GS E&C]

GS Engineering and Construction (GS E&C) is the sole contractor for the project, and will complete both the design and construction for Singapore’s Land Transport Authority.

The center is scheduled to be completed by late 2024.

The company will receive technical support from the state-run Korea Railroad Research Institute.

Last year, GS E&C built a comprehensive railway test line in Osong, North Chungcheong, which is operated by the institute.

GS E&C submitted a higher bid than an Australian consortium for the project, but was selected due to the company’s experience with building the train testing center, the company said.

The Osong railway test line is able to drive up to 250 kilometers (155 miles) per hour. Tracks and streetcar lines can be tested at the center.

“The latest collaboration is an example of how a private company and public institute can cooperate,” GS E&C said in a statement.

The train testing center marks GS E&C’s ninth project from Singapore’s Land Transport Authority. The company has to date secured 4.3 trillion won in projects from the authority, including several projects on Singapore’s subway line and a vehicle garage, which is the largest in the world.

GS E&C was able to win the bid for the train testing center because “the company successfully opened the comprehensive railway test line in Osong in a turn-key method, and successfully executed various projects in Singapore, receiving approval for our technical and execution skills,” said GS E&C Senior Executive Vice President Lee Sahng-ki.

Turn-key operation refers to projects that can be sold to any buyer as a completed product.

Lee vowed to successfully carry out the project.