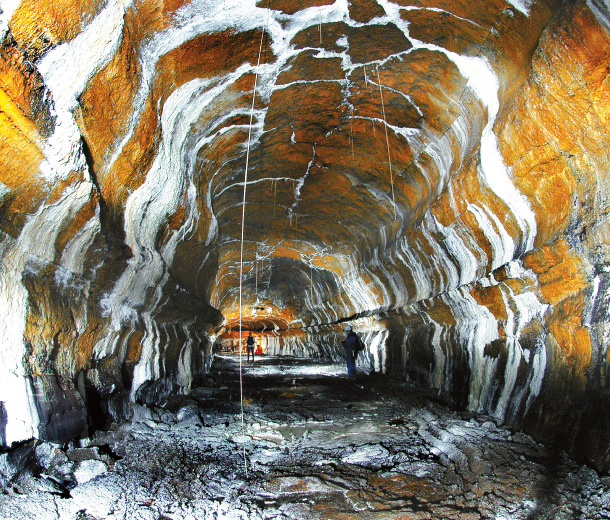 As the world grapples to contain the spread of Covid-19, parks, museums and beaches have closed down, and historical locations that have weathered thousands of years of global events have not been exempt.

As of April 6, 89 percent of countries with Unesco heritage sites have shut them down in their efforts to contain the spread of the virus, according to Unesco.

But we also live in the most connected era of history, which allowed for Unesco to launch its recent project.

“With the support of Google Arts & Culture, Unesco is launching an interactive online exhibition featuring dozens of World Heritage properties from across the globe,” the organization wrote on its website earlier this month as it launched its “Share Our Heritage” campaign.

“We will also be sharing first-hand accounts from World Heritage site managers, the caretakers of these outstanding places, who will offer you a unique glimpse into the impact of Covid-19 on World Heritage sites, as well as the intangible cultural heritage of surrounding communities,” it said.

The first site to be introduced in the campaign was Korea’s Jeju Island. The volcanic island of Jeju and its lava tubes were inscribed in the Unesco World Heritage list in 2007 for their unique exhibition of volcanic features that tell a story of Earth.

“We were contacted by Unesco asking if Korea would be interested in participating in the campaign with Jeju,” said Ha Jung-sik, an official at Korea’s Cultural Heritage Administration, the government body responsible for research and preservation of heritage sites in Korea. 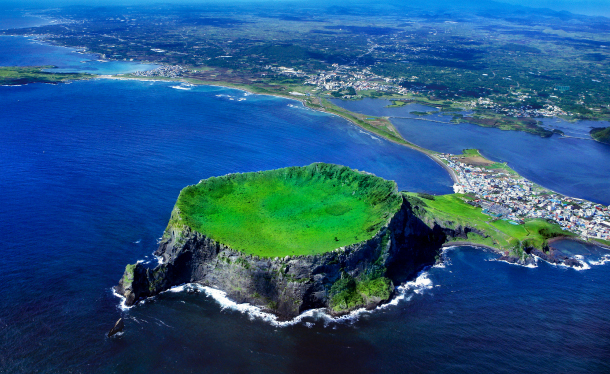 The Seongsan Ilchulbong tuff cone, above. The lava tube system, the tuff cone and the volcanic Mount Halla, the highest peak in Korea, were inscribed on the Unesco World Heritage list in 2007 for their diverse volcanic features. [JEJU WORLD NATURAL HERITAGE CENTER]

The sites in Jeju that were added to the Unesco list in 2007 is made up of three parts: there is Mount Halla, a shield volcano that makes up most of the island and boasts the highest peak in Korea, making it a popular destination for hikers; Seongsan Ilchulbong tuff cone, which is situated on the eastern coast of the island and is one of the most recommended places to watch the sun rise on Jan. 1 every year; and the Geomunoreum lava tube system, which is regarded as the “finest such cave system in the world,” according to Unesco.

The virtual tour of the three sites on Unesco’s website informs visitors of changes at the sites due to the coronavirus outbreak and provides a short introduction of how the sites came to be recognized by Unesco.

While the indoor facilities of the three sites, such as on-site museums, have been off-limits since February, the hiking trails on the mountain and the tuff cone and a trail to the lava tube system have remained open.

For those hoping to make a visit, the Korea JoongAng Daily spoke to the officials managing the site for tips on how to get the most out of a visit in person.

Mount Halla is estimated to have formed out of several volcanic eruptions that took place between 20,000 and 190,000 years ago, according to the latest research by Jeju World Natural Heritage Center.

Trails on the mountain therefore give visitors a close look at the remnants of the eruptions.

There are seven trails available on Mount Halla. Of them, only two lead to the peak: the 8.7-kilometer (5.4-mile) Gwaneumsa Temple Trail and the 9.6-kilometer Seongpanak Trail. According to Hallasan National Park authorities, the Gwaneumsa trail should take around five hours one-way, and the Seongpanak trail around four and a half hours. Those hoping to pass the famous azalea fields on their way should take the Seongpanak Trail. Comparing the two trails, Seongpanak is known to be less steep than Gwaneumsa.

Hikers should start early in the morning so that they can begin hiking back down by 2 p.m. at the latest, according to the national park. Trails may be closed in the case of severe weather conditions. For the latest information, dial +82-2-1330. 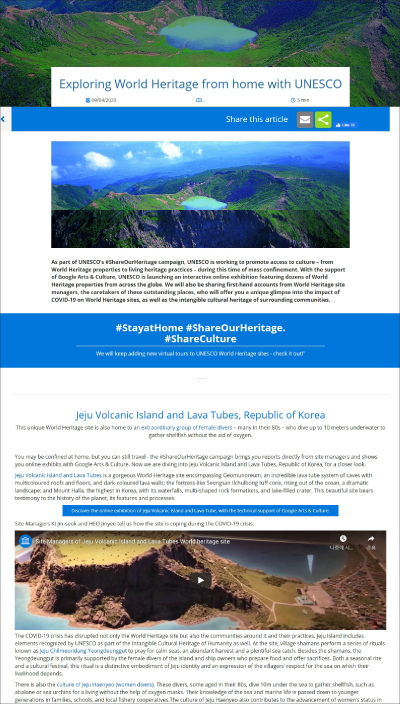 Seongsan Ilchulbong tuff cone formed around 5,000 years ago when a volcanic eruption took place below sea level. The tuff cone is the result of lava that rose out of the sea.

The tuff cone used to be isolated in the sea until a road was built to it in 1940.

At the peak of the tuff cone, a hike which takes less than an hour, visitors will get to see a 2.8 million square-feet crater that is about the size of 24 football fields. It’s one of the most popular destinations among locals on Dec. 31, who book a place in the vicinity that night, get up early the next day and hike to the peak to see the first sunrise of the new year.

The Geomunoreum Lava Tube system consists of several caves that formed when lava from the volcano Geomunoreum, located in the northern part of the island, flowed out during an eruption and left the caves in its trail.

The date of the eruption is disputed, with some saying that it took place as long as 200,000 years ago, while some research dates it back to just 8,000 years ago.

Manjanggul is about 4.5 miles long. Visitors are allowed to walk around as far as the first half mile from the entrance. The cave is about 60 feet wide and 75 feet tall, making it one of the larger caves in the world. At the end of the cave’s opening to the public stands a 25-feet tall lava column, which is the largest that has ever been discovered in the world. The cave is also known for its unique carbonate decorations on the ceilings. It is open from 9 a.m. to 6 p.m. every day except Wednesdays.

The Yongcheongdonggul and Dangcheomulgul caves are known for their unique type of secondary mineral deposits, but both have been shut down permanently for preservation. A virtual reality tour of Yongcheongdonggul cave is available on YouTube via the K-Heritage TV channel, which is run by the Korea Cultural Heritage Foundation.