KBO announces season will commence on May 5

KBO announces season will commence on May 5 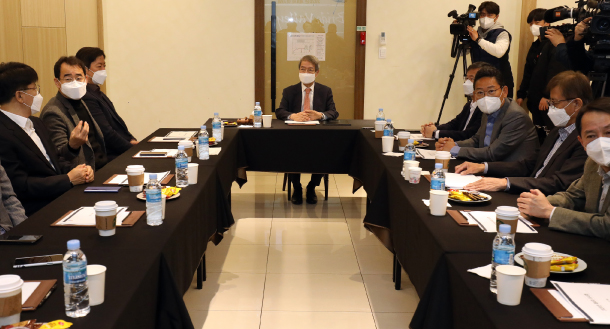 Chung Un-chan, center, commissioner of the KBO, holds a board of governors meeting with club presidents at a convention center in Seoul on Tuesday. The KBO announced the official starting date for the 2020 regular season, May 5. [YONHAP]

Tuesday, May 5, is the official start date of the 2020 KBO regular season.

Following the organization’s weekly meeting with the executive members of the 10 clubs and league officials on Tuesday, the KBO announced that it will start the 2020 KBO season on May 5, which is also Children’s Day in Korea, and to start the season in the safest situation possible, all games will be played in empty stadiums.

“We felt that we could still crown the champion before the end of November if we start on May 5 [as opposed to May 1],” KBO Secretary General Ryu Dae-hwan was quoted as saying by Yonhap. “Instead of rushing to get things started early, we wanted to keep things safe.”

Choosing May 5 as the starting date gives all the KBO clubs exactly two weeks of notice before the official start of the season.

Preseason games started on Monday, with each club playing four games until April 27. However, following the meetings, the KBO allowed the clubs to play three more games per club.

Originally, all the games were scheduled to start at 2 p.m., but some of the games have been rescheduled to 6 p.m. so the players can adjust to playing at night under lights.

Once the season starts, the KBO will monitor the situation of the coronavirus and will take one step at a time in terms of allowing fans into the stadiums. All games will be televised.

Since the season was delayed by more than a month due to the outbreak of the coronavirus in the country - it was initially scheduled to begin on March 28 - the KBO decided to cancel the All-Star Game and changed the format of the playoff games in the postseason. Normally, the first round of the playoffs is played in a best-of-five series. However, this season, it will ll be played in a best-of-three series. The format of the Korean Series will remain the same.

However, the KBO is still set on playing a total of 144 games per team this season, but this number could be reduced at any time if a player tests positive for the coronavirus.

Since the postseason is expected to be played until the end of November, the KBO announced that all the postseason games will be played at Gocheok Sky Dome in western Seoul, the only domed stadium in Korea.

Also, ahead of the start of the preseason games, the KBO revealed a manual to all the clubs in a bid to prevent any players or the coaching staff from contracting the coronavirus. Players and officials are expected to minimize their contact with others, get their temperature checked twice before the game and are required to fill out daily health questionnaires on a KBO app.

During the games, players are not recommended to give high fives or handshakes with their bare hands, and players have been prohibited from spitting.

On Monday, the KBO teams started their first preseason games of the year at empty stadiums. Despite the stadiums having zero fans, they weren’t as silent as expected as the teams had their cheerleaders rooting for them.

All umpires wore masks and plastic gloves throughout the games on Monday. In terms of the interviews with the media, players and managers stood two meters (6.6 feet) away from the reporters.

Along with baseball, the K League, too, is starting to get back in action. Although it has not specifically announced the start date of the season, the league announced on Tuesday that it will finalize it later this week. The K League was the first pro sports league in Korea to announce a postponement of its season. The 2020 season was set to start on Feb. 29.

Just like the KBO, the K League is also expected to start its season in empty stadiums.

Korea’s FA Cup also announced it will start the first round of the tournament behind closed doors in May.