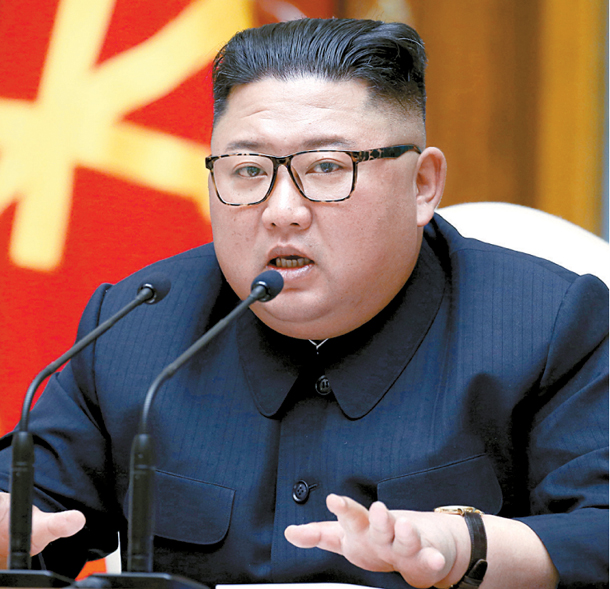 North Korean leader Kim Jong-un speaks at a Politburo meeting on April 11, his most recent appearance in state media. [YONHAP]

Jennifer Jacobs, White House correspondent for Bloomberg, tweeted later on Tuesday that the U.S. Donald Trump administration received information that Kim had heart surgery and “if he’s alive, his health is poor.” It was unclear to U.S. officials whether Kim was dead or alive, she added.

That was the first time since Kim Jong-un’s rise to power in 2011 that he failed to pay respects to Kim Il Sung at the Kumsusan Palace of the Sun mausoleum. The country marked Kim Il Sung’s birthday, referred to as the Day of the Sun, in a subdued manner this year owing largely to the coronavirus pandemic.

The dictator received the surgery due to “obesity, prolific smoking habits, and ‘overwork’” at the Hyangsan Medical Center in North Pyongan Province, a facility that supposedly exists solely to care for the Kim family, the report said, citing an anonymous source.

According to Yonhap News Agency, a South Korean government official in charge of inter-Korean affairs said there was “nothing special” to suggest Kim’s health was failing and that he appeared to be working as normal. Reuters quoted two more government sources in Seoul, both of whom denied the reports.

Conservative opposition lawmakers in South Korea, however, claimed there was something behind the reports. Rep. Yoon Sang-hyun of the United Future Party (UFP), who leads the National Assembly’s committee for foreign affairs and unification, told reporters Tuesday that he had it on the word of “the person with the most trustworthy information on the North” that Kim had undergone heart surgery. Yoon further claimed Pyongyang was in lockdown since a few days ago and that “something is definitely happening” in the country.

Ji Seong-ho, a defector recently elected as a proportional representative from the UFP’s sister party, also said he had heard Kim’s condition was “particularly not good” and that the dictator was facing a life-threatening situation.

According to the Daily NK report, Kim’s operation was headed by a surgeon from Pyongyang’s Kim Man Yu Hospital, a medical center set up by an ethnic Korean from Japan who was known to be close to Kim Jong-un’s late father, Kim Jong-il. Top doctors from other hospitals in the country’s capital cared for the dictator but have since returned to Pyongyang after his condition improved, the report said.

But the report couldn’t be confirmed given that the health of the leader is a state secret in the North. When Kim visited Singapore for his first summit with U.S. President Donald Trump in June 2018, he used a mobile bathroom that the North Koreans brought with them to keep information about his health from leaking out to foreign intelligence.

This is also not the first time rumors have circulated about Kim, 36, being in ill health. In the fall of 2014, Kim was not seen in a public setting for almost 40 days, leading to gossip about his health. Kim later surfaced in a public setting supported by a cane, which South Korean intelligence later confirmed was owed to the removal of a cyst from his ankle.

It is, however, also questionable whether North Korea - a very patriarchal society accustomed to the paternalistic propaganda promoting three generations of Kim men - would accept the leadership of a young and inexperienced woman.