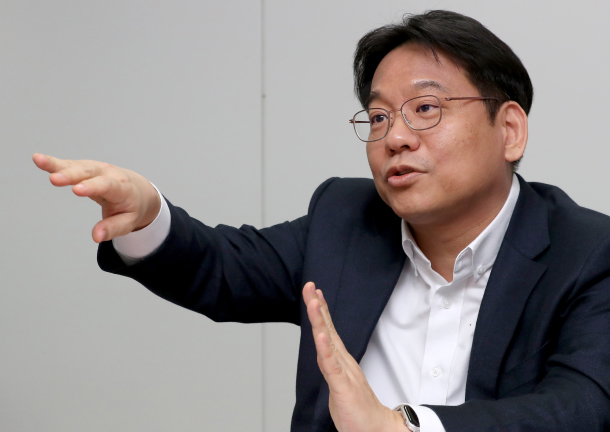 Yoon Sung-roh speaks at his office in Jongno District, central Seoul, on Monday during an interview with the JoongAng Ilbo. [CHOI JEONG-DONG]

Yoon Sung-roh, head of the Presidential Committee on the Fourth Industrial Revolution, expressed his desire to grow the Korean telemedicine market in an interview with the JoongAng Ilbo on Monday. Considering the progress of telemedicine in other countries, Yoon, a professor of electrical and computer engineering at Seoul National University, stressed the Korean government should accelerate relevant measures.

Below are edited excerpts of the interview with Yoon.

Q. What are the implications of the coronavirus outbreak for our industries?

A. The outbreak revealed our society’s competitiveness in the fourth industrial era. Areas that adapted to the fourth industrial revolution earlier, such as online shopping, have been competitive, but public education and small- and medium-sized companies were vulnerable. We also found that cloud services can bring new opportunities. As a nation, we should build competitiveness in areas in which we can do better and come up with countermeasures in areas in which we are falling behind.

In your inauguration speech in February, you stressed that you would “lead the era of artificial intelligence [AI].” What do you mean by that? 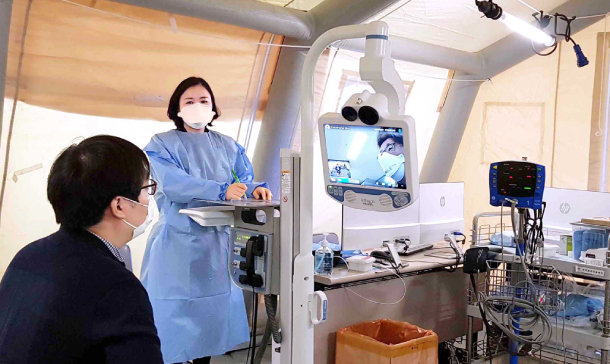 Medical professionals use robots at a testing center in Myongji Hospital in Goyang, Gyeonggi. The government temporarily allowed telemedicine from Feb. 24 to prevent the spread of Covid-19. [MYONGJI HOSPITAL]

Which regulatory reform should be prioritized?

The telemedicine market. It’s been controversial for a long time as large hospitals and small hospitals have different positions, but now is the time to bring telemedicine to the public forum. The incentive system can be organized by accepting the opinions of the medical community before implementing telemedicine.

Our medical professionals are the ones who took the lead in overcoming the coronavirus crisis. Although the medical community is opposed to it, it’s time to start full discussions over telemedicine implementation.

Is there a solid plan?

As a matter directly related to a person’s life, telemedicine is a topic that requires diverse opinions through various discussions. Therefore, we will start discussing telemedicine as early as May through a hackathon organized by the Presidential Committee on the Fourth Industrial Revolution. It will create a forum for public debate that can entertain a diverse set of voices, not only from medical circles but also from the Ministry of Health and Welfare, private experts, civic groups and patient groups. I hope it can be a place where all the problems of telemedicine are shared and solved. At the pan-government level, we are considering implementing it first for Korean nationals residing abroad rather than immediately targeting the entire nation.

What are the support measures to the sectors hit by the coronavirus pandemic?

Public education and small- and medium-sized enterprises lack competitiveness in the fourth industrial era. I’m a professor, and it’s true that there are not many ways to conduct online lectures and ensure the quality of classes. When the university is like this, how will it be in high schools, middle schools and elementary schools? Most small- and medium-sized companies neither have the infrastructure nor the manpower. Whether it’s online lectures or corporate work systems, we want to prepare ways to create and disseminate models that can be referenced in other sectors. We will also discuss the future of education and fostering talented people who can lead the fourth industrial revolution and actively respond to social change.

Start-ups had high hopes ahead of the three data bills. What do you think about that?

The Presidential Committee on the Fourth Industrial Revolution is collecting opinions through the committee’s data ombudsman system. Inquiries and suggestions related to data law from not only start-ups but also from major industries such as telecommunications, distribution, finance and health care will then be delivered to each government department, which can then be reflected in future policy guidelines.

How is Korea ranked in the AI industry?

The United States is by far the best in AI competitiveness, followed by China, Britain and Canada. Korea comes fifth together with Israel. I have a sense of frustration regarding the designation of universities specifically for AI. In the United States, Stanford University and Massachusetts Institute of Technology do not have departments specialized in AI, but related academic researchers simply gather to create a new research organization. Cloud services from Amazon and Google can be used at anytime. Success in AI will accelerate if the Korean government stops the selection of AI universities and respects the autonomy of each university.