Economy shrinks 1.4% in Q1 due to virus outbreak

Economy shrinks 1.4% in Q1 due to virus outbreak 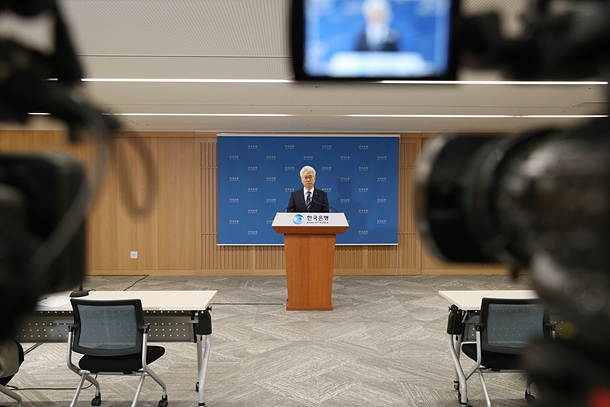 Korea’s economy shrunk in the first quarter as a result of the coronavirus pandemic.

The Bank of Korea (BOK) announced Thursday that gross domestic product contracted by 1.4 percent during the Jan.-March period compared to the previous period. It was the worst contraction in nearly 12 years since negative 3.3 percent growth in the fourth quarter of 2008.

“Government spending as well as investment in equipment and construction slowed down while private consumption and exports shifted to a downward trend,” the bank said.

Private consumption recorded a 6.4 percent drop in the first quarter compared to the previous quarter. That was the sharpest drop since the first quarter of 1998, when the Asian financial crisis dragged down that figure by 13.8 percent.

Exports dropped 4.1 percent compared to the previous quarter with machinery and car exports shrinking 2 percent despite a better-than-expected performance in the semiconductor sector.

The BOK announcement came a week after China announced minus 6.8 percent year-on-year economy growth in the Jan.-March period, its first contraction since Beijing started compiling figures in their current form in 1992.

“It might seem that Korea’s economic shock is not as bad compared to China, but considering the pattern of Korea’s economy in the past, it is hard to say that the figure is okay,” said Park Yang-su, head of BOK’s economics statistics department during a press briefing Thursday.

The virus-driven economic fallout in Korea will be more severe in the second quarter, he predicted, especially for exports.

“Covid-19 became a worldwide pandemic in March so the global demand shrinkage will be reflected in export figures in the second quarter,” Park said. “Korea’s employment situation worsened in March, which will also play a negative role in the domestic economy.”

According to the Korea Customs Service, Korea’s exports fell by 27 percent in the first 20 days of April compared to the same period last year.

The International Monetary Fund recently revised its economic outlook for Korea for this year from 2.2 percent to minus 1.2 percent.