Mini on steroids is here, fast and ready to impress

Mini on steroids is here, fast and ready to impress 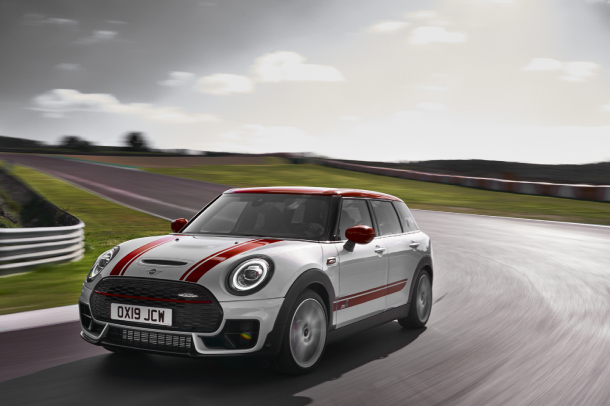 Mini introduced the upgraded JCW Clubman, its best-performing model, in Korea as it seeks to continue the success from last year, the premium small car brand under BMW Group announced Thursday.

Equipped with a four-cylinder turbo engine, the third-generation JCW Clubman is rated at 306 horsepower and 45.9 kilogram-meters (332 pound-feet) in torque. Compared to its predecessor, which hit the Korean market in 2019, Mini Korea said the latest release is rated 75 horsepower higher than the second-generation model.

With an eight-speed “Steptronic” automatic transmission, the new JCW Clubman can reach 100 kilometers (62 miles) per hour in speed from a full-stop in 4.9 seconds, Mini Korea said. It added that the JCW Clubman is the sportiest and the best-performing Mini model.

The new JCW Clubman also has an upgraded suspension system to provide a more dynamic driving experience, Mini Korea noted. The latest release has fuel economy of 10 kilometers per liter.

For the new JCW Clubman, which is 4.27 meters (14 feet) long, 1.8 meters wide and 1.44 meters tall, Mini enlarged its signature honeycomb grille and equipped it with full-LED headlights and rear lamps. The car priced at 57 million won ($46,000) comes with 19-inch light alloy wheels and now supports the wireless Apple CarPlay system.

Mini Korea is also preparing to launch the Mini Electric, the first electric version of the iconic tiny car, in Korea this year.

Import automakers have been faring relatively well in Korea as their domestic counterparts struggled greatly as the coronavirus disrupted their production and sale schedules.

According to the Korea Automobile Importers and Distributors Association, import automakers sold a total of 54,669 vehicles in the first quarter, up 4.8 percent from the first three months a year earlier. Mini Korea’s sales were up 9.4 percent to 2,265 units.

Mini Korea sold more than 10,000 vehicles last year for the first time, a milestone commonly associated with successful import automakers in the country.