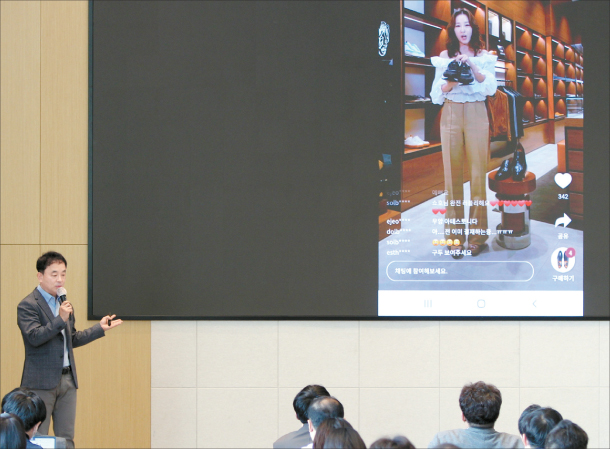 Cho Young-je, head of the e-commerce business unit of Lotte Shopping, speaks about the newly launched app Lotte On during a press event held in Jamsil, southern Seoul, on Monday. [LOTTE SHOPPING]

Lotte Shopping on Monday unveiled an e-commerce app, Lotte On, which connects seven of the conglomerate’s retail units.

The app’s release marks the company’s first major initiative since it established an e-commerce department in 2018 to strengthen its online business.

The company says it aims to generate 20 trillion won ($17.8 billion) in sales through the app by 2023. Its online sales last year amounted to 11 trillion won.

Lotte On largely referenced Netflix because its primary focus was offering personalized service.

“Hyper-personalization and data commerce are the key words that explain Lotte On,” Cho Young-je, head of the e-commerce business unit at Lotte Shopping, said during a press event held in Jamsil, southern Seoul, on Monday.

By integrating data from seven affiliates, Lotte On offers recommendations based on a customer’s past purchases and the purchase patterns of other similar customers.

“Lotte On is the only e-commerce operator in Korea that integrates data from both online and offline stores,” said Cho.

Emart has a separate online entity SSG.com, where Shinsegae affiliates are entered. But Emart’s online and offline units don’t share customer data at this point but plans to share that information through its payment system SSG.com, according to Kim Ha-eun from SSG.com.

“Seventy-five percent of the population, or 39 million people, are Lotte customers. Connecting the back offices [of the affiliates] will dramatically raise the quality of data garnered,” said Cho.

Lotte On offers “open market” services, in which individual sellers can enter the platform, but sellers that meet a higher standard on the platform’s “pick index” will be given more prominence within the app.

Open market sellers are charged a commission for selling on the platform. The company refused to disclose the rate.

On the pick index is Lotte’s set of standards that evaluates a seller’s quality.

“The ultimate goal of Lotte On is a shopping platform without a search engine,” said Cho. “Lotte On will create a borderless shopping environment between online and offline by connecting the 15,000 offline stores Lotte owns.”

Cho added that the company will not join the cutthroat competition.

“Maintaining the business while suffering losses [doesn’t make sense] because it means the company will just have to deal with the losses,” he said, referring indirectly to Coupang, which generated a 70 billion won operating loss last year.

Instead of offering immediate delivery, Lotte will enable customers to pick a time to receive the product.

“Lotte Shopping is launching Lotte On with a determination to fight to the death in the age when the company’s value has dipped due to struggling department stores and discount marts,” said Seo Yong-gu, a professor of business administration at Sookmyung Women’s University.

The market capitalization for Lotte Shopping is 2.73 trillion won.

“Considering its assets, including real estate, Lotte Shopping’s market cap should stand at least at 15 trillion won, but it’s very low at this point due to the pessimism toward its future growth based on offline businesses,” Seo said. “Considering the old brand image, baby boomers in their 50s and 60s are likely to be the app’s primary users.”