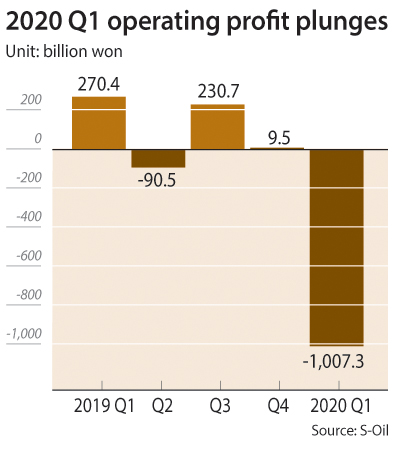 S-Oil reported its largest quarterly operating loss ever as the value of its inventory plummeted on massive oversupply.

In the January-March period, the company lost 1.01 trillion won ($824 million) on an operating basis.

The pandemic had dealt a massive blow to demand for transport hydrocarbons, like jet fuel and gasoline - ultimately taking refining margins to below zero. The inventory valuation loss, which results when the price of the inventory drops below the purchase price, totaled 721 billion won.

By segment, refined products lost 1.19 trillion won on an operating basis. In the January-March period, operating profit for petrochemicals was 66.5 billion won, down 56.1 percent on year. Lube base oils generated 116.2 billion won in profit, up 310.8 percent.

The company anticipated a better second quarter, saying refining margins would “gradually bottom out” as countries reopen borders and the global economy restarts. A score of oil refiners cutting production and conducting regular maintenance in the spring season would also work in its favor, S-Oil said.

“The refining margin for April isn’t looking good, but we anticipate figures to greatly improve in May and June. It’s hard to predict second-quarter performance at the moment, but I believe we will move close to the break-even point - at least more so than the first quarter,” Ko Gwang-cheol, investor relations head, said on a conference call Monday.

S-Oil made it clear during the call that it will maintain its operation rate for production facilities at 100 percent during the second quarter, emphasizing that the massive loss was caused by a valuation loss due to lower oil prices, not poor sales. However, there will be maintenance activities for some facilities from June.

Owned by Saudi Aramco, S-Oil is the first of Korea’s top four oil refiners to announce quarterly results. Analysts forecast that the four will report a combined operating loss of 3 trillion won in the January-March period.

SK Innovation has lowered the operation rate of its production facilities to 85 percent from 100 last month.

Hyundai Oilbank and GS Caltex have advanced schedules for maintenance on its production facilities.