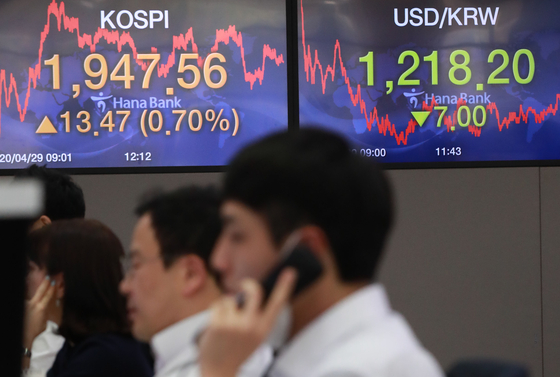 The screen in the dealing room of Hana Bank in Jung-district, central Seoul show the benchmark Kospi for Wednesday. [YONHAP]


Stocks ended higher for a third straight session Wednesday as investor sentiment was buoyed by expectations of robust earnings at U.S. tech firms. The won rose against the dollar.

Investors are awaiting next week’s earnings results from major U.S. companies, such as Amazon and Microsoft, to take a cue in reorganizing their portfolios, analysts said.
“At the same time, they will be closely monitoring coronavirus infection rates and each government’s ongoing discussions of how to restart economic activity,” Roh Dong-kil, an analyst at NH Investment & Securities, said.

The U.S. Federal Reserve’s policy decision, due Wednesday, is also being watched by investors.
Institutions and foreigners bought a combined 484 billion won worth of stocks, offsetting individual stock selling valued at 483 billion won.

Large-cap stocks were mixed across the board.

The local currency closed at 1,218.20 won against the dollar, down 7.00 won from the previous session’s close.