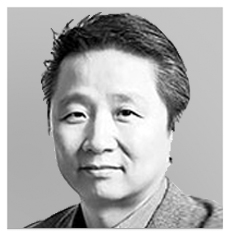 President Moon Jae-in did not exaggerate when he declared that the economy was in a wartime state. Data backs his statement. The economy contracted 1.4 percent in the first quarter, the worst performance in 11 years. Trading in April saw a deficit for the first time in 99 months. Salaried workers were reduced by 225,000 in March for the first time since data began being compiled in 2009. Output and consumption is at its weakest. The president is correct to argue that the nation’s resources should be concentrated on overcoming the crisis.

He also proposed the right prescriptions by launching a state-led Korean-style New Deal project to create jobs. Although the president has so far been right in many ways in dealing with the crisis, he has yet to revisit his decision to phase out nuclear energy. Why stick to a nuclear phase-out when it is incongruous with a war-torn economy? He must withdraw the decision immediately and order a resumption of the construction of Shin Hanul nuclear reactors Units 3 and 4. The additions will only help the economy and do little harm.

First of all, state utility Korea Electric Power Corporation (Kepco) will be able to lessen losses and hikes in electricity bills. The coronavirus has wrecked havoc on industrial sites, companies and households. The government can hardly think about raising bills at such a time. Kepco’s snowballing losses also cannot be neglected anymore.

Second, jobs can be created. Doosan Heavy Industries & Construction had to let go of 650 engineers through early retirement. Thousands of jobs have been lost from its 2,600 suppliers after the reactor equipment maker ran out of work since the phase-out policy went into place.

Third, people can save on taxes. Public funding of billions of dollars to sustain the troubled Doosan Heavy can instead be spent to improve the livelihoods of citizens.

Fourth, reactor technology can be used to build up national assets. The world is increasingly becoming more protectionist and nationalistic. Korea’s power lies in its light-water reactor technology. It does not need any imports or help from other countries.

Fifth, the global nuclear reactor market is in a boom. New orders have reached 158 units since last year. If Korea can bring home some of the orders, it can earn billions of dollars. Nuclear fuel also enhances energy self-sufficiency, reduces carbon and dust emissions, helps address climate change and environmental issues and strengthens industrial competitiveness. The list of merits goes on and on.

The nuclear phase-out was a policy that had little public support from the beginning. I do not want to believe that the president has reached his decision after watching a disaster film. No leader makes a decision in such a way. The president must have been misinformed or misguided. There had been several chances for him to undo this wrong. 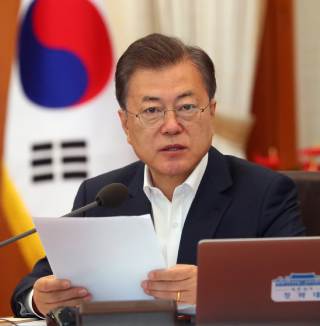 In a cabinet meeting at the Blue House last week, President Moon Jae-in said Korea is ’in a state of war“ in economic terms. [JOINT PRESS CORPS]


In polls about whether to continue with the ongoing construction of Shin Kori units 5 and 6, the yeas far outweighed the nays. The government then should have humbly withdrawn its decision to stop the construction. It should not have added ambiguous questions to justify its plan to go on with the phase-out. During late 2018 and early 2019, when fine dust pollution suffocated the country, the government could have bumped up nuclear reactor activity to reduce fossil fuel-powered generators.

Last April, the president again had the chance to reactivate nuclear reactors when he launched a national climate and environment committee since the role of nuclear reactors was recognized by the United Nations for helping reduce greenhouse gas.

Another chance ? a coronavirus-triggered economic crisis ? has arrived. The president must not lose this chance. The environment cannot be better. The president only has to change his mind. He won’t be losing face. The government and ruling party now dominate the judiciary, legislative and executive branches. His sincerity could help people who are dependent on the state more than ever to survive.

The relief fund has stirred more conflict between the haves and have-nots. Compassion and sacrifice must come from the leadership. The president must show that he can bend his pride and do whatever he can to save jobs and companies. Scrapping the nuclear phase-out can epitomize his determination.