The ‘Nth room’ case shocked the public earlier this year when details of the inhumane crime was revealed through media reports and investigation results. Although the idea of digital sex crimes wasn’t new, the horrifying atrocities of what had been going on inside the anonymous chat rooms brought the issue to the surface like never before. Among the crimes are some lesser-known forms of digital sex crimes that had gone unnoticed by the public over the years but has come to light with the case. Through this two-part series, the Korea JoongAng Daily looks into the two types of crime that had not been properly addressed before: ‘friend fouling’ and deepfakes. 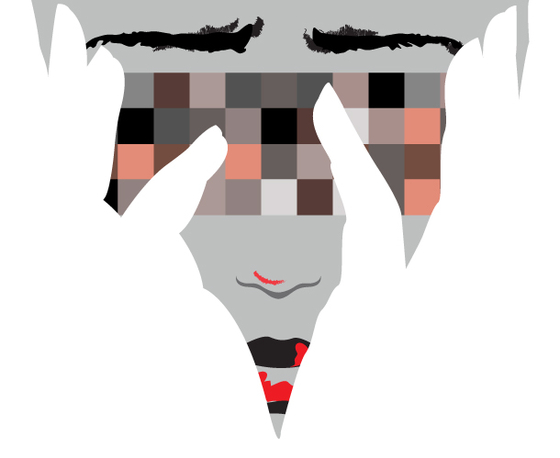 
Collaging a popular female celebrity’s face onto a picture of a nude model and passing it around among friends is a sex crime that many teenagers have been committing without even being aware that it’s subject to punishment. Such actions may be laughed away, but what if the collaged face was not a top star’s but yours?

Sexual crimes online seem to evolve so rapidly that people often respond in utter disbelief to the latest iteration. The “Nth room” scandal - in which a trafficking ring used Telegram and cryptocurrency to blackmail and enslave young women - is one such example.

“Friend fouling” is a common feature of these crimes in recent months. This is when personal information, such as the victim’s specific address and contacts that can only be known by their friends, is used. This activity is popular among teens as a way “to get back” at classmates that they don’t like.

The degree of violation runs the gamut. It goes from run-of-the-mill and relatively innocent photographs being circulated to far more graphic content being transmitted.

Whatever the degree, those who become subjects, or victims, of friend fouling, would feel equally humiliated and traumatized. After the Nth room scandal, the public has been criticizing the lax punishment of internet sex criminals, therefore the country revised the criminal act on sexual crimes, with the reforms going into effect on June 25. But friend fouling did not make it into the bill because it was not yet well-known enough to be understood.

It wasn’t until last month that Kang Hoon, better known by his internet alias “Butta,” was reported to have run “friend fouling” chat rooms in Telegram.

The friend fouling example mentioned above wasn’t a “what if” for a university student surnamed Lee. She found out a month ago that her younger sister had fallen victim to such a crime, and she decided to raise her voice and get friend fouling included in the revision.

Around 4 a.m. on March 23, Lee’s younger sister received a message from an unknown Instagram user, informing her that there’s a picture of her going around on a Tumblr account.

“I asked my sister to send me the link and found out that the Tumblr account was one of those accounts where people only post their acquaintance’s photos and their personal information,” said Lee. “I had to scroll down to find my sister’s picture, and in that account alone, there were 1,017 postings of just random people. And I found a total of two posts of my sister among them.”

So far, Lee said she found a total of five posts of her sister’s pictures, but no one knows how many times the pictures had been reposted to other accounts and other platforms.

“For her, it was her selfie with the address of her social media account, her name, the district of residence, her age and her body size and some sexual comments about her,” Lee said. “But for others, most of the postings were collages of their faces on pictures of nude bodies while providing specific information about them down to their school, their address and even their phone numbers. When I went into their social media account, the victim’s personal information really did match what was in the account.”

Lee personally contacted the victims to let them know about the situation. Most of them, according to Lee, said they had no idea that their photos and information were spreading on the accounts but that they were getting annoyed by weird and sexual text messages from strangers.

“If it’s really, really bad, their information even reached the hands of the aggressors of the Nth room, and that’s one of the ways they become [slaves of the Nth room],” Lee said. “At least when [the photos] are shared on Tumblr and Twitter, you can google your name and find them. But when it’s shared on chat rooms such as Telegram, you can’t even find out whether or not you’ve become a victim.”

Lee is currently the only advocate of the victims of friend fouling publicly active and collecting information about the cases to gather more victims together in hopes that the seriousness of the crime can be perceived by the public so that it can be entitled to a proper full-on investigation. Her first petition submitted to the Blue House to investigate the perpetrators of friend fouling ended on April 24 and received over 70,000 signatures. Although it failed to receive a response from the Blue House, Lee views this as an encouraging start.

“When we first started the petition, the rest of the representatives [except for me] were victims who promoted the petition,” Lee explained. “But then other victims’ social media accounts and personal information got leaked on male dominant and misogynistic sites such as Ilbe, so I was the only one promoting the petition for the last two weeks. So even receiving this much support is hopeful.” 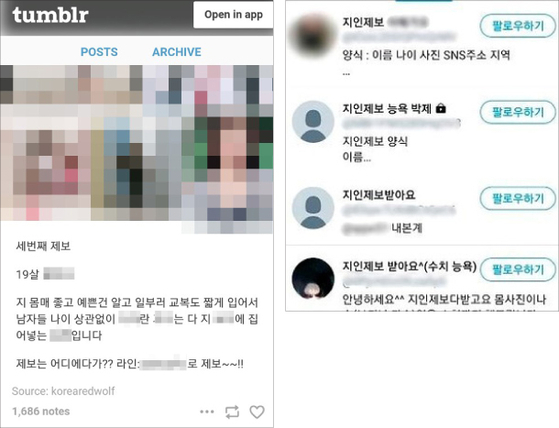 
Is it teen culture?

Friend fouling, according to experts, takes place actively among teens.

“This horribly twisted teen culture became a kind in which children intrude upon other people’s rights. They post these pictures and treat them like a piece of gossip, without feeling any guilt or remorse for their actions,” Lee Soo-jung, a forensic psychologist and a professor at Kyonggi University said. “Adults just weren’t aware of it, but teens see this merely as a form of school bullying that has now transited to online platforms to evade punishment since direct bullying leaves a trace, while it’s easy not to find in the virtual world.”

To root out such horrific actions, the professor does not think there’s an answer in criminal punishment.

“For some specific cases there may be a clear division of an aggressor and a victim. But for most cases, the distinction is very vague: Victims may become aggressors to retaliate. This culture won’t go away anytime soon through catching and punishing one or two perpetrators.”

Sociology Professor Lee Na-young from Chung-Ang University, however, points out that sex crimes have always been the problem of teens.

“When did anyone say that sex crime is an adult crime?” she asks. “It has always been teen culture - or rather, a crime fueled through male teenagers’ desires. There’s nothing new about this. The only thing that has changed are their tools. It was pornographic photos, films and videos in the 70s and 80s. Technology advancement transformed the crime into a more complex, digital one. But people are finally starting to realize that there’s no point in victimizing or blaming the victims, because through digital crimes, hundreds of victims can be created in a single day.”

Is there a solution?

For Lee, the next step for her and the other friend fouling victims is to prepare to file for a petition at the National Assembly, in hopes that this crime can too be included in the criminal laws and to launch a full investigation into the matter.

“Currently, distributors, sellers and creators of only those sexually collaged photographs can be punished by the criminal law,” said Lee. The rest, like my sister’s case, can only file for defamation.”

Another downside is that revised criminal punishment on internet sex crimes will apply from June 25. For crimes committed before the date, these laws won’t apply.

“First, we will ask the Assembly to include aggressors who committed the friend fouling crime before June 25 in the revision so that they, too, can be punished,” said Lee. “Then we want a separate bill to be created to punish all the distributors and creators of friend fouling, even if the photographs are not collaged sexually. Lastly, we ask to punish those who committed secondary offenses through possessing, sharing and redistributing the false content online.”

Equally important as punishing the aggressors is to get this crime to be accepted for full investigation for victims who still live in fear that their photos and information may still be shared on the net.

“If it’s launched as a full investigation, police investigations can be carried out even without reports from the victims who may have been unaware of their offense, and that’s what we want to do. Eradicate this crime once and for all,” Lee said. “So we’ll continue to do whatever we can to raise the issue and make friend fouling familiar to the public. We’ve been doing press interviews, and also a foreign documentary team who’s been following internet sex crimes in Korea for the past five to six years reached us, and we’re planning to meet them as well. If we manage to receive global spotlight, I believe things could really change.”

“Right now, [friend fouling] is not included in the revised criminal act on sexual crimes, but as more awareness is raised for the kinds of crimes happening in the digital space, related punishment may also follow,” Professor Lee said.

“But for teenagers, I believe the responsibility falls upon the educational facilities. All these teens from the Nth room and other internet sex crimes show how wrongly these kids have received their sex education. So where is the Ministry of Education on all of this? All of these policies deviating from nth room scandal excludes the Ministry when the very beginning of nth room could have started from this teen culture.”