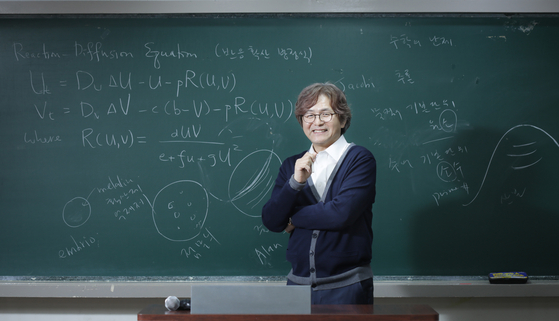 
Ever since he was young, Park Hyung-ju, 56, has always dreamed of earning the Fields Medal, the most prestigious academic award a mathematician can hope to achieve. He was especially concerned with solving the Jacobian Conjecture, one of the great mathematical mysteries, unsolved ever since it was first conceived in 1939.


Unfortunately, Park has not solved the problem just yet, maybe because for the past few years, he has been preoccupied with another great mystery: the problem of Korean education.

Now, Park has taken hold of the steering wheel. Two years ago, he was inaugurated as the president of Ajou University — which has been aspiring to cement its name as the “MIT of Asia” — located in Suwon, Gyeonggi.

As Park noted, “Korean students are outstanding,” referring to how Korea usually places first or second in the International Math Olympiad, essentially the most prestigious mathematics competition for students not old enough to attend university. It is also a good indicator of future success in mathematics: one in three Fields medalists have been participants in the Olympiad.

And here lies the new mystery Park is determined to solve: despite Korea’s success in the Olympiad, not a single Korean has won the Fields Medal.

While Park believes that issues need to be resolved for the education system throughout elementary to high school, a major paradigm shift is required for tertiary education in Korea as well. In fact, he believes the coronavirus outbreak provides the perfect opportunity to do away with traditional but ineffective teaching methods and replace them with more innovative ones.

Kim recently sat down for an interview with the JoongAng Ilbo to discuss his approach to the problems posed by the outbreak, explaining current issues persisting within the university and how some new initiatives at Ajou could provide answers.

Q. What are some changes that you realized need to take place in Ajou University?

A. I personally place great importance on data and statistics. Recently when I questioned the admissions office personnel on why they made a certain decision, they would answer that they just used their intuition. But such vagueness is troubling. Decisions must be backed by data, whether the issue is about essay examinations, the school curriculum, or the College Scholastic Ability Test [CSAT].

So it is a data-driven approach.

My confidence in the data-driven approach has only grown stronger after I became the president of the university. For example, Ajou University’s post-graduation employment rate is ranked third in the country. Before analyzing the data, people figured that students with high grades at the time of admission and graduation will yield good employment outcomes.

But a close study of available data actually revealed that students who followed an interdisciplinary approach to their education, while pursuing a wide range of activities such as competitions and individual research, had much higher post-graduation employment rates. The answer to why we have high employment outcomes is clear here. Guesswork and intuition cannot win out over hard data.


The test can be taken only once a year. For early admissions, universities accept students mostly based on other factors such as high school grades and extracurricular activities.] How is Ajou University approaching this early admissions versus regular admissions issue?

How is the university faring with the shift to online classes due to the coronavirus outbreak?

We were relatively well prepared for this change. Previous to the outbreak, 42 classrooms were outfitted with recording technology, and we had a video recording studio prepared as well. We had also already analyzed data about students’ study patterns, although the outbreak gave us even more data to work with through the online classes.

[For Park, the “Thinking Class” is a major aspect of his initiative. Inspired by the teaching styles from the École polytechnique fédérale de Lausanne (EPFL), a prestigious university located in Switzerland, Park wants Korean classes to focus less on repetition and more on problem solving.


In the Thinking Class program, students learn the basic concepts online and come prepared to do more challenging thinking with these concepts offline with their peers and professors in the classroom.] How do you envision the university’s future?

A university is a place for students to work out problems, not to absorb knowledge. My short-term goal is to have the Thinking Class comprise half of our available classes. Both students and professors work three times harder in these Thinking Classes. Although much more effort is required, it yields great results: EPFL’s post-graduation employment rates soar above that of other universities.

And recruiting businesses want classes to be like this as well. The future of education lies in classes like these, ones that emphasize “blended learning” — utilizing a mixture of online and offline classes. This ratio of online to offline classes will ultimately be determined based on the students’ abilities, the major in question and the school learning environment.

Any other changes planned for the university?


At Ajou University, students have the opportunity to follow the Paran Academic Semester System. “Paran” [meaning blue in Korean] is one of Ajou University’s school colors. But it has two additional meanings as well.

One being to “shatter the eggshell” [that is, to shatter existing paradigms], and the other being to achieve one’s dreams. In this academic calendar, students independently design their own curriculum and get graded accordingly. Starting from 2016, over the past eight semesters, a total of 775 students participated in this program.

Also, unless students actively use knowledge, they forget the concepts that they learn in class after the semester is over. But that is all going to change soon. The university is going to integrate a study-activity plan into the curriculum. By the end of the class, students would have not only studied the topic but would have actively engaged with the concept as well.

Finally, even after the coronavirus situation is fully resolved, it is important to keep using online-based learning. Ajou University will try to maintain the number of online classes at between 30 to 50 percent. This way, students will learn concepts by themselves online and practice using these concepts offline in the classroom with the professor.

We want to make this type of class — one which really pushes students to exercise their intellectual muscles — to become the baseline of the “Ajou Way.”

What do you think of the general state of education in Korea?

In Korea, average students, the gifted, and the exceptional ones are all in one classroom. But instead of a one-size-fits-all system, Korea needs to work on providing options for the gifted and exceptional students. I have met many gifted students in my life, and I have met so many world-class geniuses as well. Geniuses just do not like repetitive classes.

But the classes in Korea rely on repetition, and, naturally, it is difficult for geniuses to prosper in this kind of environment.

While many students in America choose to go law school or medical school, two in three Korean students choose to major in math. So it is normal to have high expectations for our students. Our professors and students must focus on solving the big questions, not the small ones.