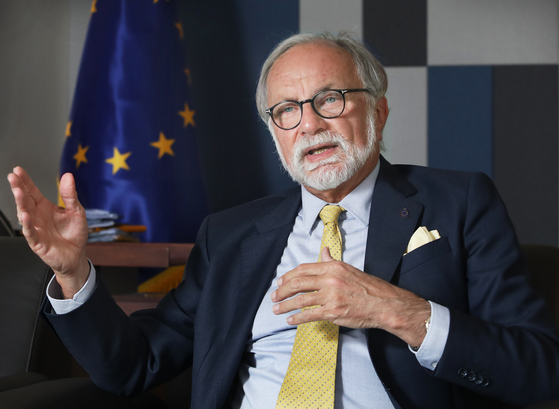 Ambassador of the European Union to Korea Michael Reiterer speaks with the Korea JoongAng Daily on Wednesday about European Union-Korea cooperation on the Covid-19 outbreak and celebrations planned for Europe Day, which falls on Saturday. [PARK SANG-MOON]

EU ambassador talks about the response to the Covid-19 pandemic


The best weapon against a virus with no borders may be acting just like it.

“It’s not like the virus has a passport and needs a visa to get in,” said Michael Reiterer, ambassador of the European Union to Korea. “This is no time to return to the beggar-thy-neighbor policies that countries resorted to after World War I. We saw how that turned out. It is time to call for more multilateralism and international cooperation, not less.”

Reiterer spoke to the Korea JoongAng Daily Wednesday, just two days before Europe Day. The day, which falls on May 9 every year, celebrates peace and unity in Europe. This year’s celebration marks the 70th anniversary of the Schuman Declaration, a statement made between France and Germany on coal and steel production that became the foundation for what the EU is today.

“The importance was to know what were the main ingredients for making war, and then to leave them to the control of multilateral authority, out of the hands of the six member states at the time,” Reiterer said. “This idea has been with the European Union for 70 years, that we need institutions, the commission, the council, the parliament, the court based on law and the single market as the backbone of the European Union.” 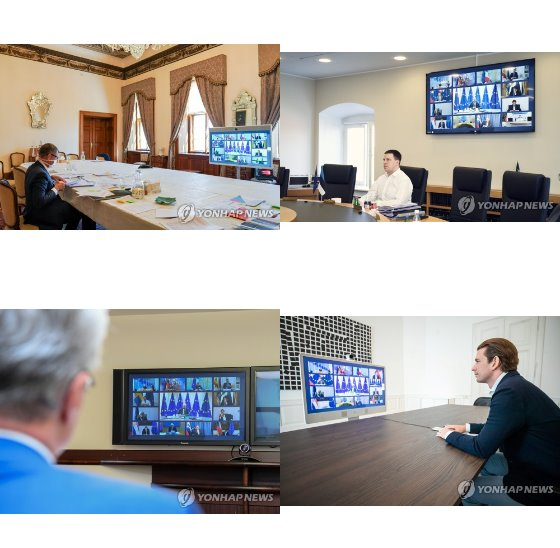 Leaders of member states of the European Union participate in a video conference on April 23. [REUTERS/YONHAP]

The Covid-19 outbreak has posed a challenge to the union on how they will share the costs of the health crisis. EU leaders held a video conference on April 23 to discuss what next year’s budget will look like.

“We are in the middle of negotiations and the original plan was that the spending of EU for the next five years will be about 1 percent of European accumulated GDP,” said Reiterer. “But now with the need for money for liquidity, there is an argument that it will not be enough. There are two possibilities. One is to decide on 2 percent of GDP instead and have a much bigger European budget. The other is to keep the budget at the 1 percent mark and create additional funds.”

Disruptions to daily lives due to the outbreak have not fazed some leaders in Europe who continue to meet over video conferences, including with their counterparts in Korea.

“A science diplomacy platform has been in place between the EU and Korea long before the outbreak,” Reiterer said.

“This year marks the 10th anniversary of strategic partnership between the EU and Korea,” Reiterer said. “A summit among European Council President Charles Michel, European Commission President Ursula von der Leyen and President Moon Jae-in is being scheduled at the moment.”

Earlier in May, the EU garnered a 7.5 billion euro ($8 billion) pledge for research on vaccines. Korea participated with a $46 million pledge. The European Commission has also recently organized purchases of test kits and other medical equipment from Korea.

“A science diplomacy platform has been in place between the EU and Korea long before the outbreak,” Reiterer said.

Europe Day celebrations in Korea will also move to a virtual space.

Cellist Yang Sung-won, flutist Jasmine Choi, violinist Han Soo-jin and pianist Kim Tae-hyung will be performing for audiences in both Korea and Europe, which will be streamed online on May 9.

“The theme of the concert is peace and unity,” Reiterer said. “Peace is a topic of high relevance in Korea, which is technically still in the state of war. The artists have chosen the location of their performances and the music to fit the theme. It will be interesting to look out for where they have selected to perform.” 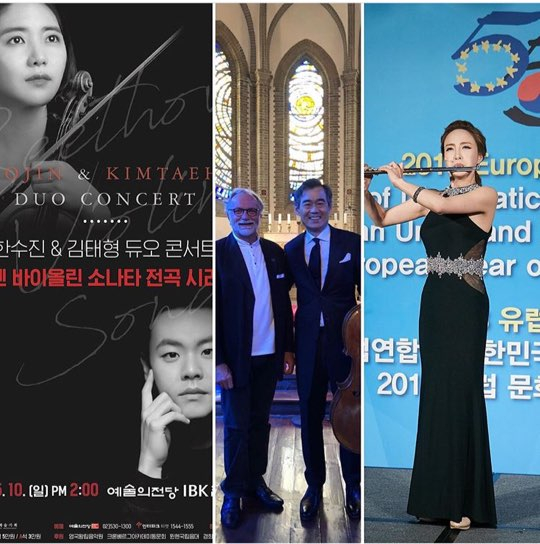 Artists who are to perform for the Europe Day online concert on May 9, organized by the EU Delegation in Seoul. [SCREEN CAPTURE OF MICHAEL REITERER'S INSTAGRAM ACCOUNT]

There is still more room for cooperation between the EU and Korea, the ambassador said.

“This is the fourth virus outbreak in the 21st century,” he said. “We have to think about some of the causal factors behind that. People only talk about the virus because it’s here and now, and the discussions about climate change have all but disappeared. We have to think about what we are doing in the long run that has lasting impacts on the environment and climate, the factors that may be behind these outbreaks.”

Korea and EU have a lot in common, must get closer: KEF chair