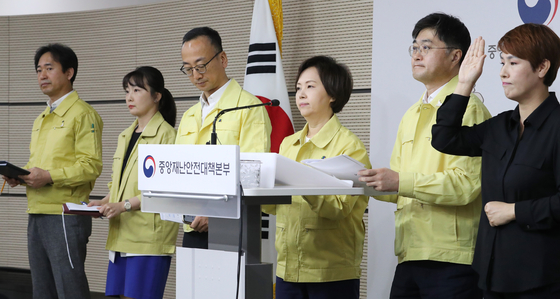 Minister of Food and Drug Safety Lee Eui-kyung, center, says that Korea will be expanding supply of masks overseas for humanitarian purposes during a briefing at the Central Disaster and Safety Countermeasure Headquarters on Thursday. [YONHAP]

South Korea is sending one million face masks to 22 countries that participated in the 1950-53 Korean War and recommending they be given to elderly veterans of that conflict, which marks its 70th anniversary next month.

The Ministry of Patriots and Veterans Affairs said in a statement Thursday, “All 22 countries that participated in the war have faced difficulties because of the Covid-19 pandemic, and providing face masks is a very urgent matter as the elderly UN Command war veterans are especially susceptible to the virus.”

The average age of Korean War veterans is 88.

The number of masks being donated took into consideration Korea’s domestic supply and the Covid-19 situation and number of veterans in each country, according to the ministry. Korea has been rationing masks and even prohibited overseas export of masks because of shortages, although supplies have bounced back recently. Exceptions in overseas mask shipments have been made for humanitarian purposes.

The Ministry of National Defense arranged to transport the first batch of masks on an Air Force aircraft departing from Gimhae International Airport in Busan to the United States on Friday.

For countries with less serious coronavirus outbreaks, the Korean Ministry of Foreign Affairs has been coordinating with its overseas missions to convey the masks by mid-May.

The United Nations Command provided support for the South during the three-year war on the Korean Peninsula that started on June 25, 1950, and ended with an armistice agreement on July 27, 1953.

Over 1.95 million soldiers from the 22 countries supported South Korea during the war, of which 37,902 were killed and 103,460 wounded, according to the Veterans Ministry.

Choi Jeong-sik, a spokesman of the Veterans Ministry, said in a briefing Thursday that the mask donation is to “convey Korea’s gratitude for the sacrifices and contribution made by the UN Command veterans marking the 70th anniversary of the Korean War.”

The masks will be sent in boxes with the 70th Anniversary of the Korean War committee emblem and the “Stay Strong” logo, a part of the Korean Foreign Ministry’s campaign to fight Covid-19.

The project required support from Korea’s Ministry of Food and Drug Safety, Ministry of Trade, Industry and Energy and the prime minister’s office.

Korea has eased social distancing measures as its outbreak has been controlled.

Korean health authorities said Thursday the government has secured the budget needed to manufacture 100 million face masks to stockpile in preparation for a second wave of infections. There are some 70 countries who have requested mask supplies from the Korean government, it added.

The Veterans Ministry said that it will review providing more masks to the war veterans overseas in the future.

There are over 3.75 million coronavirus cases worldwide and more than 260,000 deaths as of Thursday. The United States has over 1.22 million confirmed cases and more than 73,400 reported deaths.

Ban on exports of fabric used in masks to be lifted

KF-AD masks are coming to a convenience store near you