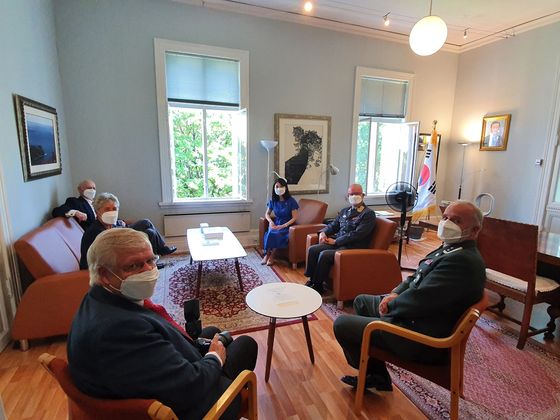 Nils Steen Egelien, president of the Norwegian Korean War Veterans Association, far left, and Korean Ambassador to Norway Nam Young-sook, center right in a blue dress, join other embassy staff members and Norwegian veterans of the Korean War to commemorate the 70th anniversary of the war's outbreak at the embassy in Oslo on June 15. [EMBASSY OF KOREA IN NORWAY] 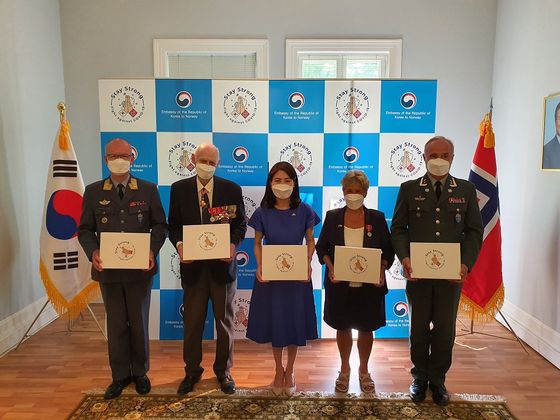 Nils Steen Egelien, president of the Norwegian Korean War Veterans Association, second from left, and Korean Ambassador to Norway Nam Young-sook pose during a ceremony to present the masks to Korean War veterans at the embassy in Oslo on June 15. [EMBASSY OF KOREA IN NORWAY]


It’s been 70 years since the outbreak of the Korean War, in which Bill Black served as an engineer on the Canadian warship HMCS Cayuga. But lately, he said his thoughts have been more frequently turning to the people of Korea.

Korea’s Ministry of Patriots and Veterans Affairs in May and June has been presenting face masks to Black and other veterans of the Korean War (1950-1953) in 22 countries, to commemorate the 70th anniversary of the war while paying heed to the ongoing Covid-19 pandemic. A total of 1 million masks have been shipped to the veterans and their relatives.

“Every time I put on my mask I think of my youth in war-torn Korea,” Black said during a June 20 interview with the Korea JoongAng Daily. “What bothers me now is the possibility of a conflict escalating again with Kim Yo-jong now in the picture.” 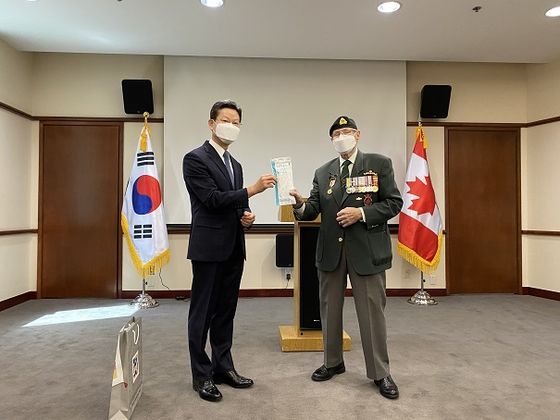 Bill Black, a Korean War veteran, right, and Korean Ambassador to Canada Shin Maeng-ho, at the ceremony at the Korean embassy in Canada on May 21 to commemorate the 70th anniversary of the outbreak of the Korean War. [EMBASSY OF KOREA IN CANADA]


“There is no single country out there safe from the Covid-19 pandemic,” the ministry said in a statement last month. “And given that the average age of veterans is around 88, they are among those most in need of protection from the virus at this time.”

The masks were presented to the veterans at Korean embassies, some of which were able to hold small-scale ceremonies. 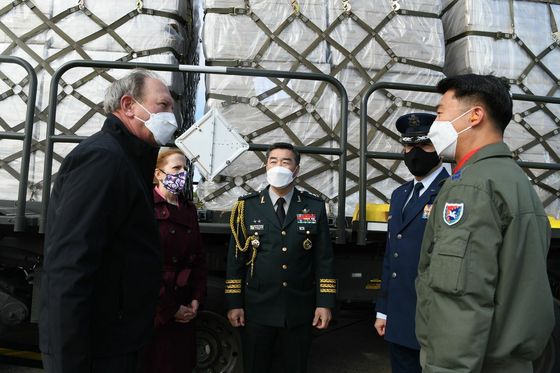 Masks from the Korean government to United States veterans of the Korean War arriving at Joint Base Andrews in Maryland on May 12. [EMBASSY OF KOREA IN THE UNITED STATES]


“We, the Korean People and our government, do appreciate your service, and we will never forget the sacrifice and contribution of the veterans and their families during the Korean War,” said Korean Ambassador to Norway Nam Young-sook during a ceremony at the embassy in Oslo. “I am honored to extend the gratitude to the veterans on behalf of Korean people and the Korean government.”

Norway set up the field hospital Norwegian Mobile Army Surgical Hospital, which treated some 90,000 patients in Korea during the war.

“It means a lot to me and other veterans that Koreans and their government still remember us and support us,” Nils Steen Egelien, president of the Norwegian Korean War Veterans Association, said in a statement from the embassy. 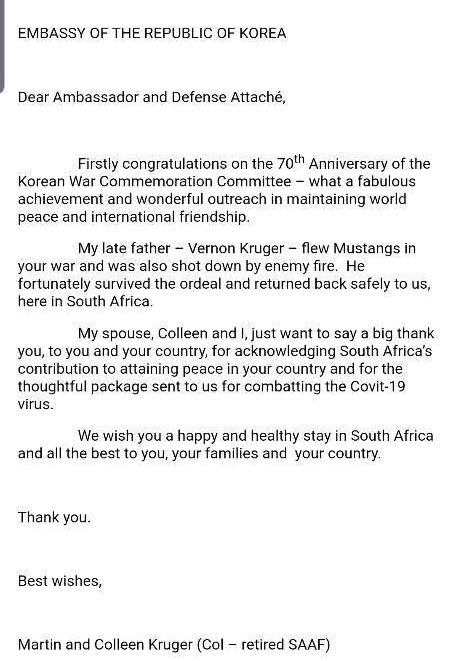 An email from veteran Vernon Kruger's family to the Korean Embassy in South Africa. [EMBASSY OF KOREA IN SOUTH AFRICA]


Veterans who received the masks shared their reactions in veteran community newsletters, social media accounts and among their family members.

"Koreans are the only ones to come and say thank you, [...] who look after us at every opportunity," said Maj. Philip Shannon of the United Kingdom's Royal Chelsea Hospital, during an online ceremony hosted by the Korean Embassy in the UK on June 5. "It's absolutely marvelous."


“My grandfather Charles MacGillicuddy called me yesterday and insisted that I come visit him today,” Siobhan MacGillicuddy, a resident of South Africa, wrote to the Korean embassy in Pretoria. “He wanted to show me and share with me what you had given him. I have not seen him light up with such happiness and appreciation in quite some time […] I have attached a picture of him, he was proudly waiting this morning for my arrival.” 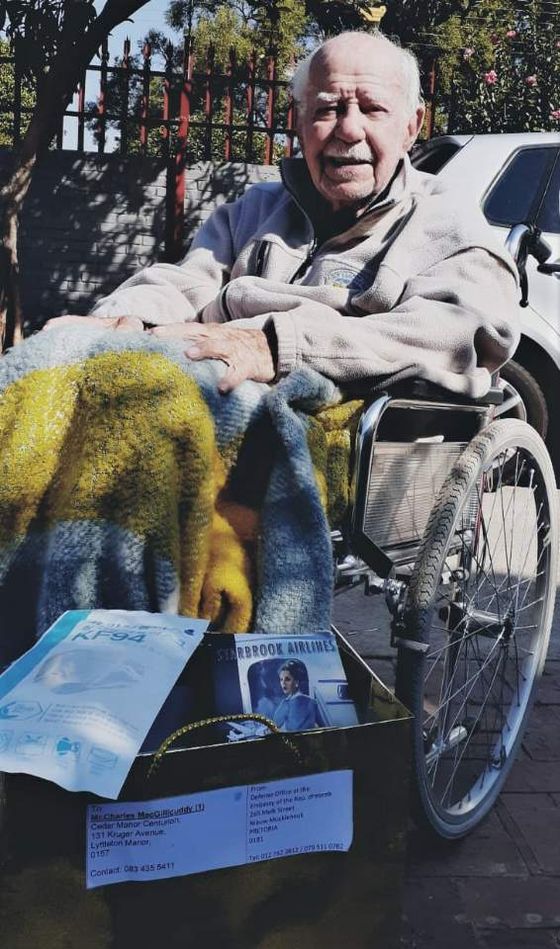 
Seventy years after the outbreak of the Korean War, the number of remaining veterans is dwindling.

“We were able to convey the masks to 179 veterans in Thailand and relatives of 255 veterans who have passed away,” said Park Gwang-rae, a defense attaché of the Korean Embassy in Thailand. “We are communicating with veterans’ associations in Thailand to see if we may have missed anyone.”

“My late father, who was a fighter pilot in Korea and passed away last year at the age of 97, would indeed be grateful that his Korean friends never forget, and that we his children value our relationship with the Republic of Korea,” Denise Elkin wrote to the Korean Embassy in South Africa on June 4.

Korean embassies in the veterans’ representative countries are hosting special events throughout the year to introduce the historical event to a wider audience.

The Korean Embassy in the UK is hosting an online book discussion with members of the country's Korean and British communities on June 25 via Zoom, featuring “DMZ Colony” by Choi Don-mee.

“Woven from poems, prose, photographs and drawings, Don Mee Choi's DMZ Colony is a tour de force of personal and political reckoning set over eight acts,” the Korean Cultural Centre of the embassy posted on its website earlier this month. “Evincing the power of translation as a poetic device to navigate historical and linguistic borders, it explores Edward Said's notion of 'the intertwined and overlapping histories.'"

The talk will be moderated by Steve J. Fowler, a writer and artist who gives lectures on creative  writing and English literature at Kingston University.

Meanwhile, the Korean Embassy in Kazakhstan opened an online photo exhibition of photos of the demilitarized zone on April 23.

The Consulate General of Korea in Sydney will also host an online photo exhibition highlighting the role of 21 Australians who served in the Korean War and also recently kicked off its “Lest Korea Forget” campaign at the Sydney Light Rail, where photographs of Australian veterans are exhibited on the train. 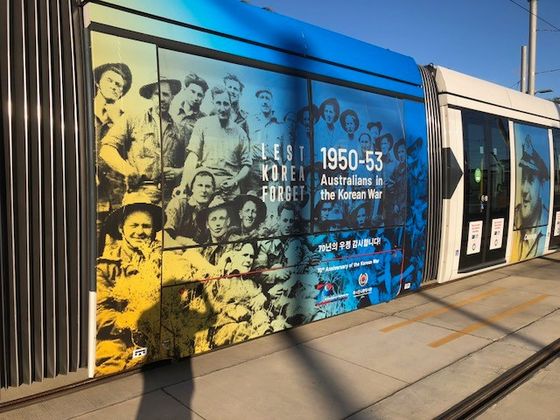 A photo taken on June 22 at Sydney Light Rail. [CONSULATE GENERAL OF KOREA IN SYDNEY]


“The American media have called it the forgotten war, but Australia, we were interested from the very start and have remembered it ever since,” said Bradley Manera, senior historian and curator of Anzac Memorial in Sydney, in the introduction to the online photo exhibition.

For many veterans like Mr. Black from Canada, memories from the Far East remain fresh.

“Our ship did aircraft plane guard and patrolled the coast, mostly on Yellow Sea,” Black said. “When we had time we visited orphans. We entertained them and brought food and clothing […] Sometimes when I look at my grandchildren I wonder what happened to those young orphans.” 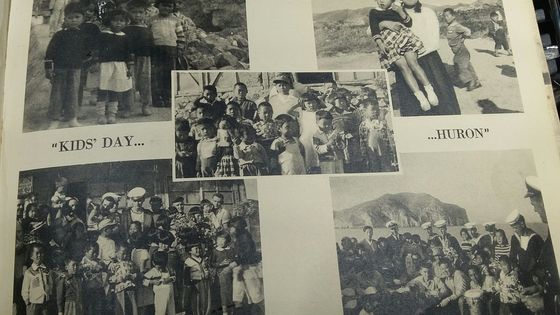 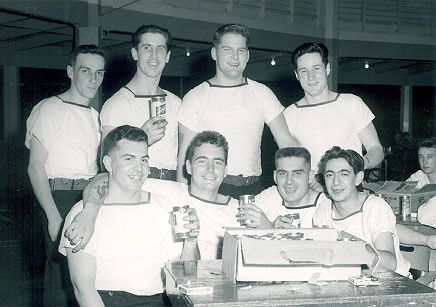