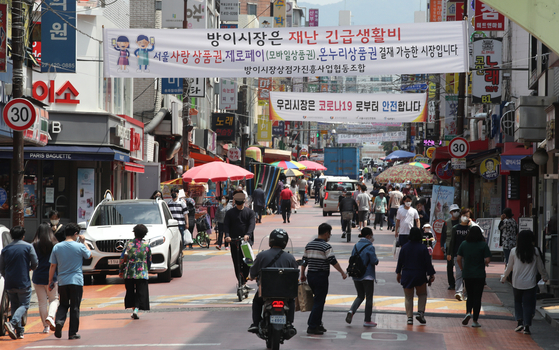 
“If you pay the dress with disaster relief money, I will have to charge you the full price, but I can give you a 1,000 won [80 cents] discount if you pay in cash.”


An owner of a clothes shop at Nammun Market in Suwon, Gyeonggi, said this Wednesday when asked if the price for a 10,000 won dress is the same for cash-paying customers as for those purchasing with disaster relief grants on their debit cards.

“I am very sorry for customers who try to purchase clothes with government grants charged on their cards. But you need to give us some slack. That’s how the local market works,” she added.

Some shop owners said they will charge extra transaction fees for purchases made on credit or debit cards. 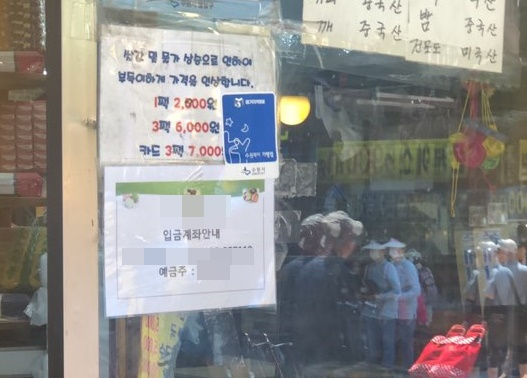 A price list is posted on the wall of a tteok, or traditional rice cake, shop in Nammun Market in Suwon, Gyeonggi. [CHAE HYE-SEON]


One owner of a tteok, or traditional rice cake, shop in the market said he adds an additional 500 won for payments made using cards. Customers with credit cards had to pay 2,500 won for a packet of tteok sold for 2,000 won when paid with cash.

When asked why, the shop owner said it was because of the transaction fees.

“We have no other choice because of the fees,” the owner answered.

With five days left until the central government officially rolls out disaster relief grants to the entire nation, Gyeonggi, the first region on the peninsula to provide such relief to all residents, is grappling with the unintended consequences.

This universal pay intended to stimulate the local economy was driving up the price of goods.

The frustration was evident online.

One member of an online community for mothers Monday posted that she was furious about being rejected by numerous merchants when trying to buy groceries with the relief money at a local farmers' market in Suwon, Gyeonggi.

“Some only accepted payments [using relief funds] of more than 10,000 won. Another place charged me 4,500 won for a cube of tofu when I tried to purchase it with government grants. There were places that demanded me pay 600 won extra for transaction fees,” she wrote.

“I don’t want to put up with this. What a waste of time traveling all the way to the local market for nothing.”

Mothers from other parts of Gyeonggi shared similar experiences.

One community member in Ilsan said she was charged more when trying to purchase goods with her disaster relief debit cards. A mother living in Seongnam said local supermarkets have raised prices after the Gyeonggi government distributed disaster allowances.

Some went directly to Lee Jae-myung, Gyeonggi's governor, to vent frustration. His Facebook page is flooded with messages from residents who claim to have been charged more when offering to pay in disaster reliefs.

“After the disaster relief was rolled out, all local stores have raised prices,” one resident said on Lee’s Facebook page.

Another resident messaged in a rage how his local fruit store started to give fewer apples for the same price.

Store owners may be using the system to their benefit, since relief money can be only used in small businesses and at stores near the recipient’s registered address. Others say the problem was inevitable, given that store owners and local markets usually prefer to receive cash than card payments from customers.

Critics stress the need for measures to stop sellers from manipulating prices, considering the central government is due to start giving out disaster relief to the entire nation from May 11.

Such market price manipulation goes against Article 19 Clause 1 of Korea’s Specialized Credit Finance Business Act, which stipulates that “credit card merchants shall not refuse the payment by a credit card or treat card holders unfavorably.”

Amid controversy over an alleged price hike in Gyeonggi, its provincial government said it will initiate a tax investigation against anyone who asks for more money or additional fees from consumers using local relief funds, which are distributed by card.

Gov. Lee declared that any stores that “discriminate consumers who purchase with local currency” are subject to “tax investigations, criminal punishment and forfeiture of their right to run a franchise.”

“Store owners are not allowed to take fees from transactions made with disaster relief cards,” said an official from the Gyeonggi government. “There is reason to believe these store owners are trying to avoid taxes by gaining unfair benefits. We will crack down and teach irresponsible store owners a lesson.”

The Ministry of Security and Public Administration recently said it would conduct a joint crackdown if the alleged malpractices continue.