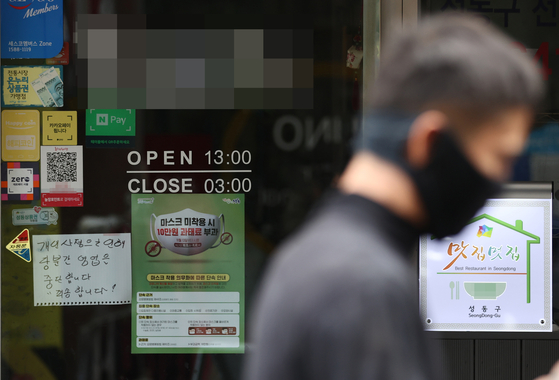 A man wearing a face mask walks past a restaurant with a temporary closure notice in Seoul. [YONHAP]


After exiting recession in the third quarter, the economy could start to weaken again as spending flags in the face of a third wave of the pandemic and stimulus money runs out.

Chairman Jeong Eun-kyeong of the Korea Disease Control and Prevention Agency raised the social distancing level to the third of five tiers on Nov. 24., warning the virus is spreading at an “alarming rate.”

The economy is facing more risk factors compared to the first two economic downturns. Experts say the real economy is already in a groggy state, exhausted from a pandemic continuing on for longer than expected.

Year-end sales, which normally help boost consumption, may not be a viable option this year for businesses. Consumer sentiment has already weakened due to coronavirus uncertainties. Household consumption shrunk by 2.2 percent in the third quarter on year despite relief grants and other stipends rolled out by the government, according to data from Statistics Korea.

The total value of exports from Nov. 1 to Nov. 20 increased by 11.1 percent from the corresponding period last year, and the daily average jumped by 7.6 percent. Future prospects for Korea’s export economy remain bleak as infection numbers surge overseas, especially in the United States, which could pose a threat to exporters.

The government may be out of options, according to experts, since the administration already burned through tax revenue and passed multiple supplementary budgets to roll out relief funds twice. In total, 85.1 trillion won ($76.7 billion) was dumped into the economy through four supplementary budgets passed from March through September. 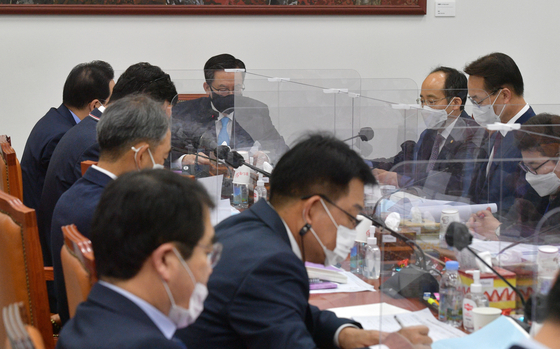 Lawmakers attend a meeting to discuss next year's budget at the National Assembly in Yeouido, western Seoul. [YONHAP]


The same plan cannot be applied right now. The administration only has a month left before the year ends, and another supplementary budget is realistically impossible. The only option left is to increase government spending budgeted for next year, or pass a supplementary budget in the first half.

This might not be easy. A 555-trillion-won “super budget” is planned for next year. With national debt already at high levels, the government says, there’s no other way to wring additional money out of the economy and debt will be created either way.

Lawmakers are pressuring the government to distribute another round of relief grants as it awaits elections for Seoul and Busan mayors next year.

“The government decided to roll out disaster relief grants for the general elections, but in real life, they were used as financial support for the wealthy,” said Kang Seong-jin, an economics professor at Korea University.

“The government needs to push with a consistent economic policy guided by experts, not by political interests.”

Experts have weighed in that the government should tighten its spending and prepare for a long-term fight against the virus. This is because a hasty decision to boost consumption temporarily could lead to another surge in Covid-19 cases.

“Disinfection measures should come before the economy right now,” said Kim Sang-bong, an economics professor at Hansung University. “If another lockdown like the one at the early stages of the pandemic comes, it could be difficult for us to handle another economic downfall.”

Some experts argue the government should refrain from repeating temporary fixes.

“Support in cash can only go so far at a time when people avoid making face-to-face purchases. The government needs to give financial support to a selective number of vulnerable people within an amount that can be managed in the case the pandemic continues on longer than expected.”