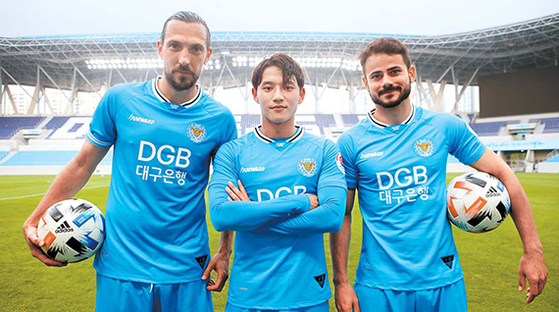 Although the season will kick off in empty stadiums due to the coronavirus, the matches will be streamed live on the K League’s YouTube channel and its Twitter account. English commentary will also be available to stream live.

Despite the lack of fans physically in the stands, Daegu anticipates its matches will be streamed a lot considering the number of sellout games it saw last season.

Along with the loyalty of its fans Daegu FC will also rely on three particular players, each with a different set of skills, to lead the team to glory at the DGB Daegu Bank Park.

The first is midfielder Jeong Seung-won, whose good looks are also credited with bringing about a new wave of female fans. The 23-year-old is still a developing player, scoring three goals and two assists throughout 33 matches in the 2019 season, but already a fan favorite.

In addition to Jeong, the club has also signed two foreign players — Cesinha and Dejan Damjanovic. Cesinha made some headlines last season after topping the league’s scoring table and finishing runner-up in the league’s assists. Throughout 35 matches, Cesinha scored 15 goals and had 10 assists.

After Dejan joined Daegu, the fans nicknamed the three the trio to look out for.

As well as the trio, Daegu FC has also been receiving attention considering its location is in the city hardest hit by the coronavirus pandemic in Korea.

Daegu FC along with the Samsung Lions, which are both based in Daegu, have been receiving attention from around the world for starting their seasons despite the outbreak.

Because of Covid-19, Daegu FC players have only traveled between the clubhouse and their homes in the past few months, to prepare for the season. While players found this routine tough, as testified to by the trio themselves, when the opening date was finally announced, the team had a big celebration.

“I was fighting against the time that was passing by with my teammates by drinking coffee on an outdoor terrace at the clubhouse and playing board games,” Jeong said.

While Jeong spent most of his time with teammates playing games and drinking coffee, Cesinha used his time in a different manner.

“During the time when we weren’t training, I spent my time with my wife,” Cesinha said. “It was really, really good.”

Although the trio spent their times differently they all agreed that playing a match in Daegu has a special meaning for everyone.

“Us playing on the pitch is the proof that we’ve fought through [the coronavirus] with the citizens of Daegu,” said Cesinha.
Dejan also said that Daegu had its “professionalism” to thank for getting through the worst of the coronavirus.

“Everyone took responsibility and fought through it well,” Dejan said. “That’s how we got a great present like the start of the K League.”
As for the trio’s goals for this season, much like how they spent their time, they are all different.

“I’ve got my eyes on Romulo Jose of Busan IPark, who earned its promotion to the K League 1 this season,” Cesinha said. “I feel like I’m going to compete for the top spot in the K League 1 scoring table.”

While Cesinha set his sights on topping the scoring table, Jeong’s goal is more team-oriented.

“We have to win against FC Seoul,” Jeong said. “Last year, we missed our spot at the [Asian Football Confederation (AFC)] Asian Champions League by playing a 0-0 scoreless draw. I always have some regrets about that.”

Dejan, who will be turning 39 this year, said that he hopes to exceed his career best this season.

Playing the beginning of the season at an empty stadium could act as a penalty for Daegu FC which became used to selling out almost all their home matches last season. Because of this, Daegu is expected to be impacted by the silence from the stands even more than the other teams.
Although Daegu made the upper split in the 2019 season, the team only finished the season tied for fifth with 13 wins, 16 draws and nine losses, totaling 55 points.

“I’ve played as a professional player for a long time, but it’ll be my first time playing at an empty stadium,” Dejan said. “I feel like my attention will head to the empty stands. Football without the fans is nothing.”

However, Jeong said he still pictures himself playing at a sellout stadium.

“We hope to be on the pitch for the AFC Asian Champions League next season,” Jeong said.

The K League, which has been postponed by more than two months due to the coronavirus, kicks off Friday, but Daegu FC won’t play its opening match against Incheon United FC at Incheon Football Stadium until 4:30 p.m. on Saturday.