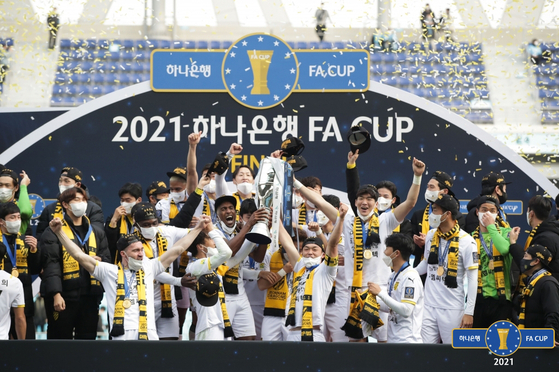 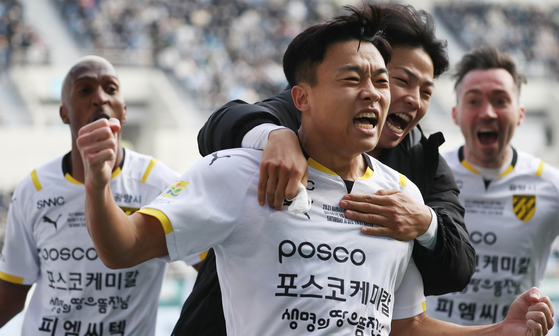 Jeong Jae-hee of the Jeonnam Dragons, center, celebrates after scoring the winning goal in the second leg of the FA Cup final against Daegu FC at DGB Daegu Bank Park in Daegu on Saturday. [YONHAP]


The Jeonnam Dragons became the first K League 2 club to ever win the FA Cup on Saturday, beating Daegu FC 4-3 at DGB Daegu Bank Park in Daegu to tie the two-leg final 4-4 on aggregate and win on away goals.

Having lost the first leg of the final 1-0 on Nov. 24, Jeonnam returned in spectacular form to win 4-3 and tie the score on aggregate on Saturday, winning the FA Cup trophy thanks to the away goals advantage.

Saturday's match was tight. Daegu initially appeared to have the upper hand, but a 24th-minute red card to Hong Jeung-un changed the tide of the game.

Hong was booked for intentionally elbowing Jeonnam's Hwang Ki-wook, and the Dragons were quick to capitalize on the unexpected advantage. In the 38th minute, Jeonnam opening the scoring when Jang Sung-jae passed the ball to Jeong Jae-hee, who crossed it to Park Chan-yong in the box. Park found the back of the net and the visitors took a 1-0 lead.

Three minutes later, Daegu's Cesinha leveled the score, catching the ball on his head then sending it home with his right foot. But Jeonnam weren't quiet for long, taking back the lead with a Ko Tae-won goal to end the first half one up.

Just six minutes into the second half, Daegu once again leveled the score when Edgar Silva scored the K League 1 club's second goal. Five minutes later, Tsubasa Nishi scored Jeonnam's third goal in the 67th minute. With the game more heated up than ever, Jeonnam’s Jeong Ho-jin was sent off after getting a second card for unsportsmanlike behavior and both teams were left one player short.

Jeonnam were undeterred. In the 83rd minute, Jeong Jae-hee found another chance to score and took the score to 4-3.

As if the seven goals and two red cards were not enough, the match took another dramatic turn. With just a few minutes left on the clock, the referee declared a penalty kick after Edgar Silva of Daegu fell, claiming that Ko had pushed the Daegu player. However, after a VAR review, the penalty was overturned and the match came to an end. 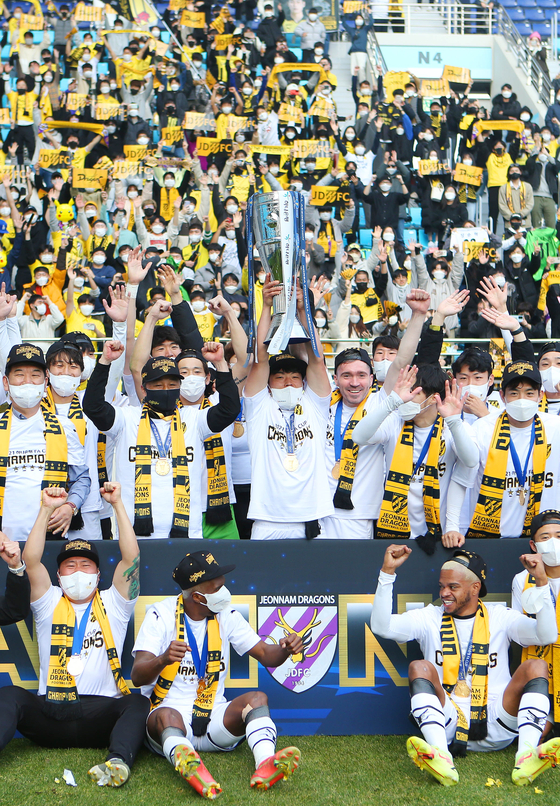 
Saturday's dramatic fixture marks the first time in FA Cup history that the final has been decided on away goals rule. The seven goals scored on Saturday are the most scored in a single FA Cup final match. The previous record was set in Jeonnam’s win against the Pohang Steelers in the first leg of the 2007 FA Cup final that ended 3-2.

The FA Cup is not part of the K league season, but is a knockout competition hosted by the Korea Football Association where the winner earns a ticket to the AFC Champions League next year. The Suwon Samsung Bluewings have the most FA Cup trophies, winning five.

Jeonnam now has the second-most titles, having won in 1997, 2006 and 2007. They finished runner-up in 2003. Despite that history, this is the first time that a second-division club have won since the promotion system was implemented in the K League in 2013. With the win, Jeonnam have now earned a spot in the AFC Champions League.

Daegu, which last won the FA Cup in 2018, missed out on the trophy once again despite winning the first leg. Daegu played the FA Cup just a week after they finished the regular K League season in third position. Despite missing out on the trophy, Daegu will be able to play the Champions League playoff next year with their third finish in the regular season.