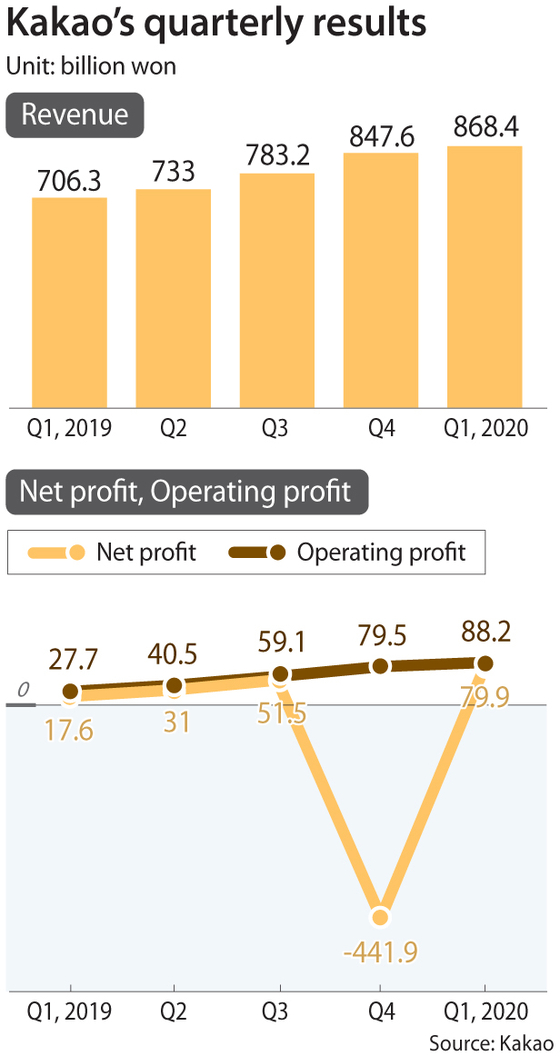 Kakao's results hit all-time highs across the board — earnings, net and operating profit — as the e-commerce and digital offerings remained popular, or became more so, during the pandemic.

These were not only records, but they beat market expectations.

E-commerce business and a new advertising platform integrated into KakaoTalk drove the strong results. The combined sales from the advertising scheme and e-commerce totaled 224.7 billion won, up 77 percent compared to the first quarter last year.

Since its introduction in October, the overall sales from KakaoTalk got a boost with the fourth quarter sales almost doubling compared to the same period the previous year.

Kakao CEO Yeo Min-soo said that the internet company was, however, not completely spared from the effect of the new coronavirus.

“As the impact of the coronavirus pandemic started taking shape in February, it affected [the sales of Talk Board],” the CEO said during a conference call on Thursday.

The gift shop on the platform that allows users to send gifts to their KakaoTalk friends continued to support income growth of the commerce business, according to Kakao in a statement.

Total transactions volume in the commerce segment increased 55 percent on year, it said, while declining to mention specific numbers.

Sales in the new business segment, which covers the sales from the affiliated apps and services like Kakao T and Kakao Pay, rose 68 percent in sales to 100.5 billion won in the first three months.

The company also noted the growing number of paid subscribers for its Piccoma webtoon platform.