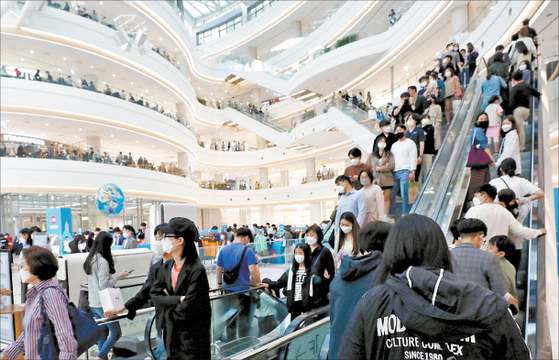 
It was a return to pre-coronavirus crowds at Hyundai Premium Outlet’s luxury section on Sunday afternoon, as mask-wearing customers continued to join the line snaking out the store’s entrance.

For Kim Hyo-jin, a 36-year-old who waited in line for 40 minutes with her husband and two children to enter the Gucci store, she said it was the first time in two months that they had all left the house.

“I was a little worried to see a huge crowd of people at the outlet store,” she said. “But I felt relieved after seeing everyone wearing face masks and employees limiting the number of people allowed in the stores.”

Kim bragged that she was able to buy a luxury bag at a 30 percent discount. Her 5-year-old and 2-year-old got a long-awaited chance to play at a children’s playground, and the family ended the day at a nice restaurant.

Could this be a sign that consumer sentiment is starting to pick up?

Major retail companies, in any event, say there's reason to be optimistic.

Some signs of rebound were evident at outlet stores, industry officials said, with luxury items and home appliances the first to benefit from the weeklong holiday season.

Thanks to family visitors like Kim, retail companies reported the number of customers and sales increased significantly from April 30 through May 3, compared to the same period last year. Hyundai Department Store said the operating profit from its outlet stores rose by 12.7 percent on year during the long weekend.

An official said that sales of luxury goods at the retail company’s Gimpo branch increased by 61.8 percent compared to the same period for the previous year.

Consumer preferences were varied widely for each category of goods. Home appliances and luxury goods lead the growth, with sales of the former increasing by 39 percent and the latter rising by 35 percent compared to last year’s May holidays.

Fashion items and food products, meanwhile, have yet to see a significant rebound. Sales of clothes and accessories dropped by 8 percent, and food sales only rose 3 percent. 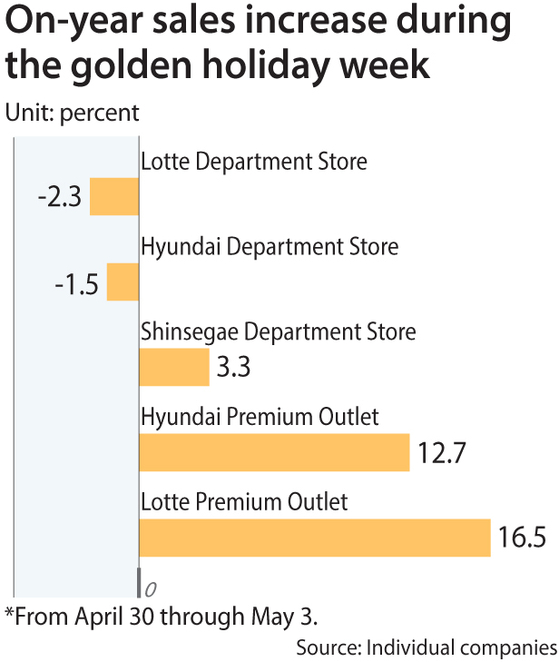 While outlet stores showed promising signs of life, department stores are still relatively dormant. Sales at the three major department stores — Lotte, Shinsegae and Hyundai — either decreased or stayed the same compared to the same period last year, although they reported a bump in sales of home appliances and imported luxury goods.

Sales at major discount stores also fell below expectations, with spending only increasing 2 percent on year during the holiday period. Like other retailers, large home appliances and digital home appliances lead sales, increasing by 25 percent and 12 percent, respectively. But that growth was largely offset by falling sales in clothes and fruits, which decreased by 6 percent and 1 percent, respectively.

This means that retail companies’ hopes that consumers would ramp up spending to compensate for months of sluggish sales have failed to materialize beyond a limited number of products.

Large discount chains are still pinning their hopes on sales figures for May 4 and 5, which have not yet been finalized. Some flagship branches were reportedly packed to capacity with Children’s Day visitors.

On Tuesday afternoon, visitors had to wait more than 15 minutes to enter the parking lot of the Gimpo branch of Traders, Emart’s discount chain. The children’s section overflowed with kids grabbing up toys.

“I came to buy presents for my son, who had to stay home for the past two months. I wasn’t planning on buying him a game console, but I decided to buy it to keep my son company since he has to stay longer hours at home,” said one father, Mr. Kim, who declined to provide his given name.

Experts expect such a polarized consumer trend, with preferences concentrated on luxury items, will continue on longer.

“Luxury goods were seen as an alternative purchase item, as worldwide lockdowns and travel bans limited the options for consumers,” said Sung Tae-yoon, an economics professor from Yonsei University.

“The economic impact from the coronavirus was relatively mild for high-income households who have the capacity to purchase high-end goods. We are likely to see this polarized purchasing pattern continue on for some time.”