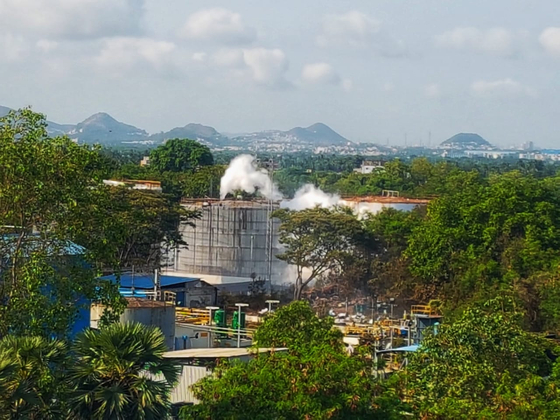 Hundreds were rushed to hospitals and several people were killed Thursday after toxic gas leaked from an LG Chem factory in India that was reopening after weeks of being locked down.

Indian media outlets reported that the gas leak at a chemical plant in Visakhapatnam in India's eastern Andhra Pradesh state killed at least nine people and resulted in hundreds of casualties in nearby villages. It is run by LG Polymers, a subsidiary of LG Chem.

According to reports, local residents experienced eye irritation and difficulty in breathing. It was also reported that almost 5,000 people fell sick from the gas leak.

Visakhapatnam has a population of more than 3 million. It was reported that poisonous styrene gas, widely used to make plastics and rubber, was leaked in the incident.

LG Chem said in a statement the leaked gas can cause nausea and dizziness when inhaled, adding that the company is investigating the exact cause of the gas leak. According to local media reports, the styrene gas leaked from two 5,000-liter gas tanks.

The factory reported 222.8 billion won ($182 million) in revenue and 6.3 billion won in net profit last year, according to the company. LG Chem acquired the plant in 1996 from Hindustan Polymer, the largest polystyrene manufacturer in India.

Short-term exposure to styrene gas results in damage to the upper respiratory tract when inhaled, according to the World Health Organization. Long-term exposure could result in damages to the liver and the central nervous system.

The company added the gas leak is under control. It said it is working with local authorities to provide medical treatment to people affected. It was reported that only a few people were inside the factory when the gas leaked as a nationwide lockdown is still in effect in India.

“Spoke to officials of MHA [Ministry of Home Affairs] and NDMA [National Disaster Management Authority] regarding the situation in Visakhapatnam, which is being monitored closely,” Indian Prime Minister Narendra Modi tweeted Thursday. “I pray for everyone’s safety and well-being in Visakhapatnam.”

Some media outlets reported that Indian officials are examining whether the leak was caused by a rush to reopen the chemical plant, which resumed operations on Wednesday after staying shut for weeks since late March.

India has been implementing a strict lockdown for weeks since the coronavirus pandemic arrived on its soil. According to Johns Hopkins University, India has reported a total of 53,045 confirmed Covid-19 cases and 1,787 deaths.

LG Chem could not be reached for an additional comment Thursday. The company’s shares on the main bourse Kospi fell 1.94 percent to 354,000 won.