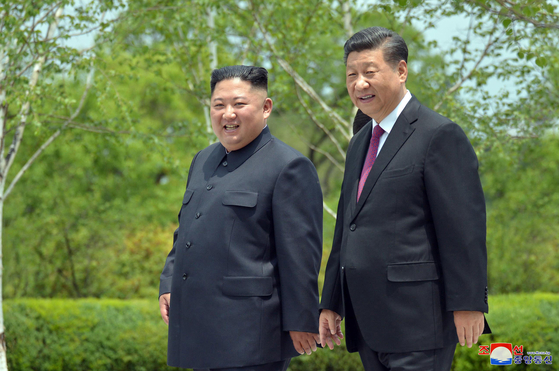 In the message, Kim "congratulated him, highly appreciating that he is seizing a chance of victory in the war against the unprecedented epidemic," according to the Korean Central News Agency.

"Kim Jong Un wished Xi Jinping good health, expressing conviction that the Chinese party and people would cement the successes made so far and steadily expand them and thus win a final victory under the wise guidance of Xi Jinping," it added.

It did not specify when and how the message has been delivered to the Chinese leader.

This marked the second time that Kim has sent a message to Xi with regard to the coronavirus this year. In late January, Kim conveyed his support and an "aid fund" for Beijing's fight against the virus that had been fast spreading in the neighboring country.

Experts see Kim's latest message as intended at reconfirming their strong relations ahead of a possible resumption of trade and exchange between the allies after restrictions due to the global pandemic.

North Korea claims to be free of coronavirus infections, but it has taken drastic precautionary measures, such as shutting down its border with China and toughening quarantine on inbound shipments.

Such steps are expected to have aggravated the already fragile North Korean economy, given that most of its outside trade depends on China, boding ill for Pyongyang's highly touted five-year economic development plan, which will be completed this year.

"After delivering aid [to China] earlier this year, [the latest message] appears aimed at reconfirming cooperative relations based on the trust between their leaders," Yang Moo-jin, a professor at the University of North Korean Studies, said.

"It also seems to carry a message for the resumption of cooperation in various areas, including the political, economic and diplomatic sectors, on the expectation that the coronavirus threat will likely ease sooner or later," he added.

North Korea has frequently praised China for its antivirus efforts since the Covid-19 broke out first in its central city of Wuhan last December, apparently highlighting their friendly relations.

North Korea and China have been boasting of their strong relations following Xi's trip for a summit with Kim last June. It was the first visit by a Chinese head of state to North Korea in 14 years.