An empty lot near Yongsan station in central Seoul. The government plans to build an apartment complex with 8,000 units on the lot. [YONHAP]

Applications for 9,000 apartments in three new towns in the Seoul area will be accepted by the government starting next year, a few years earlier than originally planned.

The move is aimed at easing the supply shortfall and is seen as a message to the market that imbalances are being addressed.

The announcement, made last week by the Ministry of Land, Infrastructure and Transport, deals with apartments to be offered on a pre-construction basis.

Also mentioned were plans to push redevelopment projects that will add 70,000 apartment units in Seoul alone by 2022.

When supply has been short in the past due to the strict regulations on reconstruction and redevelopments in Seoul, the government’s defense has been to say that there's a stable supply of apartments for the next three years.

This time, its reaction was more focused and directed.

Ministry of Land, Infrastructure and Transport Vice Minister Park Sun-ho in announcing the government’s plan on May 6 said the government is taking early steps to secure a sufficient supply of apartments.

“Housing supply has to be prepared from the mid-to-long term approach as they are long-term projects that take three to five or more years including securing the land to residents actually moving in,” Park said.

The government targets securing 40,000 apartment units through stalled reconstruction projects in Seoul by 2022.

It hopes to supply 20,000 units by speeding up reconstruction projects that have been stalled for a long period by getting public companies, including the Korea Land & Housing and the Seoul Housing & Communities, involved as developers.

The involvement of the public companies is expected to mitigate issues, including conflicts among the apartment owners that prevented the projects from moving forward.

These projects will be designated as housing supply zones that will benefit from the easing of related regulations seen holding back the development project. 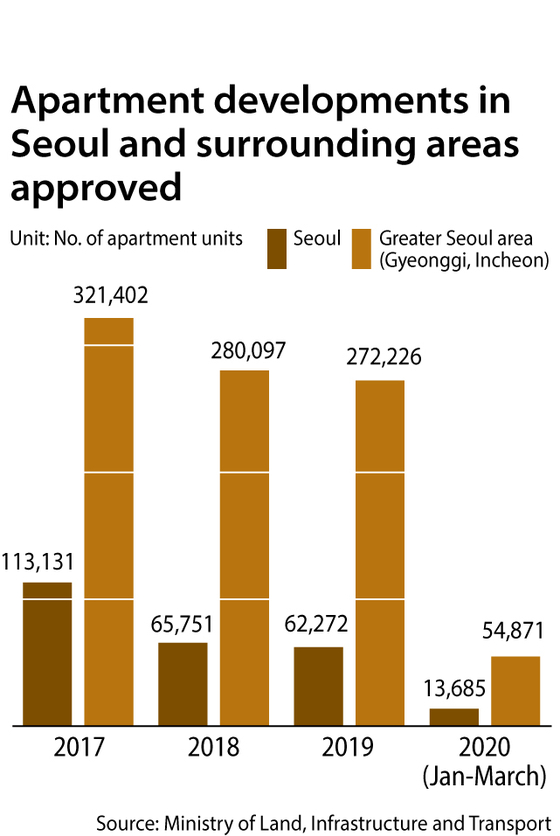 
Such moves are expected to cut the time it takes for the apartments to break ground from an average of 10 years to five years. Among the 531 reconstruction and redevelopment projects in Seoul, 102 have struggled to even launch a managing committee of apartment owners on the projects for 10 years.

In exchange for the fast tracking of the development projects, the easing of regulations and low-interest rate loans, 50 percent or more of the apartment units will be supplied for leasing to low-income households.

The government-leased apartments will at a minimum account for 20 percent.

Among the 70,000 apartments planned, 15,000 will be supplied through development of unused land, including land near Yongsan Station, where 8,000 apartment units will be built.

The government also plans to make use of empty office buildings and commercial units for housing for people living alone.

Experts say while there could be interest in the reconstruction and redevelopment projects due to the easing of regulation, including the maximum ceiling on the preconstruction sale prices, it doesn't resolve the fundamental concerns.

“Many of the supplied apartments will be leased and the offices [converted to housing units] are temporary housing units that do not ease anxiety over supply,” said Ahn Myung-sook, senior manager at Woori Bank’s real estate consulting center.