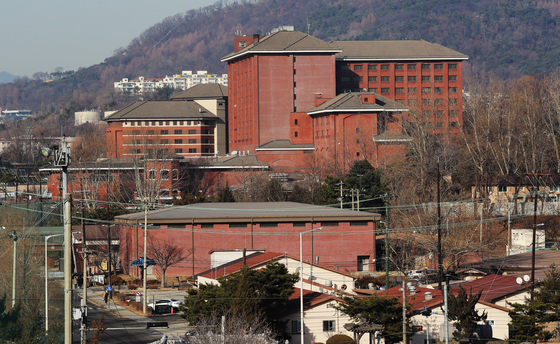 A section of the Yongsan Garrison in central Seoul on Jan. 20. [YONHAP]

A fourth of the Yongsan Garrison will be returned to Korea by early next year, the governments of the United States and Korea announced Thursday.

Although the American forces have been relocating from Yongsan for years, this was the first time a specific deadline for partial return of the land was announced.

“Both sides have committed to closely work together for returning nearly 500,000 [square meters, or 5.4 million square feet] of Yongsan Garrison by early 2022,” read the statement.

The Yongsan Garrison, which is 20 million square feet, is one of the 80 bases of U.S. forces in Korea being relocated to Pyeongtaek and Daegu as part of a Korea-U.S. agreement from 2003.

As of today, relocation of 12 bases, including the Yongsan Garrison, have not been completed.

The process on Yongsan began in 2017, when the Eighth U.S. Army moved from Yongsan to Pyeongtaek. The next year, the U.S. Forces Korea (USFK) and United Nations Command (UNC) moved their headquarters from Yongsan to Camp Humphreys in Pyeongtaek.

Last year, small sections of the garrison including a sports field were returned to Korea, consisting of some 2.6 percent of the total area of the garrison, according to Korea’s Foreign Ministry.

“With the return of the 500,000 square meters of space within the garrison by early 2022, we would have a total of some 27 percent of the garrison returned to Korea,” a ministry official told the Korea JoongAng Daily.

Part of the reason for the delay was a delay in the building of facilities in Pyeongtaek, where the Korea-U.S. Combined Forces Command (CFC) will be headquartered.

Washington and Seoul reached an agreement in 2019 to move the CFC from Yongsan to Pyeongtaek by 2021. This deadline has been pushed back to next year, according to the Foreign Ministry.

“The CFC will be able to move out of Yongsan once the structures and facilities being built in Camp Humphreys to house the CFC are completed, which we expect will be around the middle of next year,” the ministry official said. “Until that point, the CFC, in order to operate, needs continued access to various facilities in the Yongsan Garrison.”

A more controversial aspect affecting the relocation of Yongsan is an ongoing bilateral consultation on environmental effects the U.S. forces may have had on the area.

By agreements set out in SOFA signed in 1966, the United States has no obligation to restore the land its uses to the condition it found when it started using the land.

There have been reports of alarming levels of environmental contamination in areas used by the U.S. forces.

In 2018, benzene at 1,170 times the level deemed safe by the Korean government was detected in groundwater near Yongsan Garrison.

“We are still consulting with our American counterparts on reaching an agreement on what standards to use when examining environmental contamination in the area used by the U.S. forces,” said the ministry official. “We are also in discussion about who should pay for restoration of environments, if there is a need. But in order to do that, we need to agree on what counts as environmental contamination and how we should measure the contamination. These consultations are ongoing, and are part of the reason [for the delay].”

Korea intends to incorporate areas used by the Yongsan Garrison, once they are completely returned, into a public park. No deadline has been set for the complete relocation of the garrison yet, though Korea’s Ministry of Land, Infrastructure and Transport once announced an intention to complete the park by 2027. In 2016, the ministry announced the deadline was “flexible.”

As to why the government is receiving sections of the garrison instead of having the entire garrison handed over at once, the Foreign Ministry said this procedure could “speed up the process overall.”

Of the 12 American bases still being relocated, six are located in Seoul, one in Daegu, three in Gyeonggi, one in North Gyeongsang and another in Gangwon. Of the 12, Yongsan Garrison is larger than the rest combined.

yongsan garrison a fourth to be returned 2022