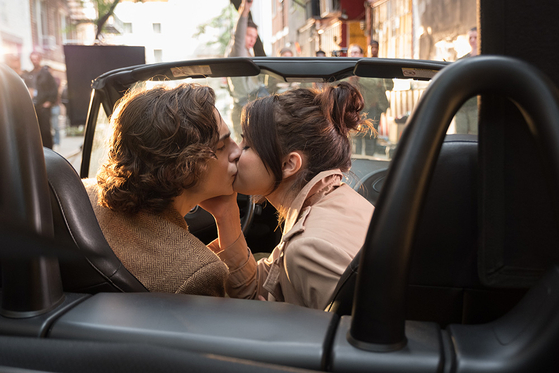 "A Rainy Day in New York" took the top spot at the local box office over the weekend after premiering in Korea on May 6. [GREEN NARAE MEDIA]


While local box office sales might no longer be in free fall, a rebound seems to be a long way away, even more so after the number of confirmed cases of the coronavirus spiked over the weekend to double digits due to a cluster of new infections based in central Seoul's Itaewon-dong last week.

Woody Allen’s “A Rainy Day in New York” took the top spot with an estimated 29,000 people seeing the film at 563 screenings. The star-studded cast of Timothée Chalamet, Elle Fanning and Selena Gomez portray characters stuck in a love triangle.

The second spot went to Daniel Radcliffe’s “Escape From Pretoria,” drawing 16,883 moviegoers to 326 screens. Based on a true story, Radcliffe plays a political prisoner named Tim Jenkin attempting to break out of Pretoria Central Prison in South Africa in 1979.