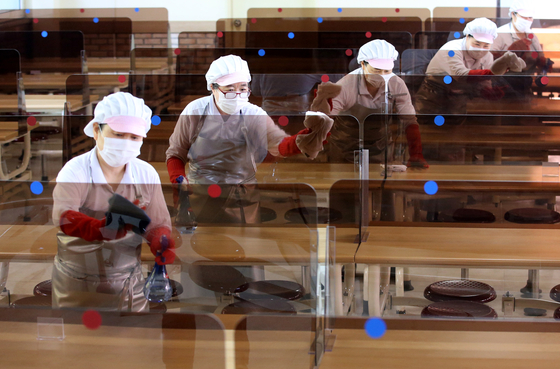 Staff at Chungnam Girls' High School in Daejeon disinfect the cafeteria on Monday ahead of a planned return of students. High school seniors were initially set to return Wednesday, followed by lower grades in following weeks, but education authorities announced Monday that the start dates have been all pushed back by one week. [NEWS1]

The Ministry of Education announced Monday that it will postpone plans to reopen classes for high school seniors, initially scheduled for Wednesday, by one week to May 20 following concerns over a recent spike in coronavirus infections linked to night clubs in Itaewon.

Vice Education Minister Park Baeg-beom also said in a press briefing late afternoon Monday that the planned phased reopening of schools for other grades over the next month will also be pushed back by one week to prioritize safety, following consultations between his ministry and health authorities.

On May 4, the Education Ministry announced that schools will reopen for high school seniors this Wednesday, with students in lower grades set to return to classes in three separate batches on May 20, May 27 and June 1. Kindergartens were initially set to open on May 20.

Under the revised schedule, the start dates for lower grades will be pushed back by one week: 11th, ninth, first and second graders, as well as kindergartners, will now resume on May 27; 10th, eighth, third and fourth graders on June 3; and fifth, sixth and seventh graders on June 8.

Elementary, middle and high school students unprecedentedly kicked off their new school year through online classes in a phased manner in April after multiple delays due to the coronavirus outbreak. The new school year usually begins in early March. However, teachers, students and parents have been facing the limitations of remote learning such as difficulties in kids concentrating and engaging in online lessons with limited interactions with their peers and teachers and also frustrations over basic technical issues.

Korea’s official social distancing campaign period wrapped up May 5 after the more than two months amid a significant drop in new cases, and the country has transitioned to "everyday life” quarantine practices.

However, parents and education authorities have been raising concerns over reopening schools after a 29-year-old who visited various clubs and bars in Itaewon on May 1 and 2 tested positive for the coronavirus last week, raising concerns of a new wave of infections. As of Monday, 86 new cases have been linked to the Itaewon cluster.

Education Minister Yoo Eun-hae held a video conference with Jeong Eun-kyeong, head of the Korea Centers for Disease Control and Prevention (KCDC), and other quarantine authorities Monday afternoon to discuss the issue of further postponing school.

Seoul Metropolitan Office of Education Superintendent Cho Hee-yeon on Monday morning proposed that the government delay school for seniors by one week to May 20 raising concerns over a second wave of infections resulting from the Itaewon club cluster. He is the first education superintendent of 17 cities and provincial governments to call for such a delay.

Cho in a statement shared on Facebook called for the government to “wait and see” how the situation unfolds to make a final decision on school reopening on May 20, which marks two weeks since Korea’s official social distancing campaign ended, transitioning to more lax restrictions.

Lee Jae-jung, the superintendent of the Gyeonggi Office of Education, likewise called for a delay in the reopening of schools.

“Taking into consideration a worsening in the Covid-19 situation, a delay in high school seniors’ return to school is inevitable,” Lee said in a press conference Monday. He said that according to a survey of the Yongin and Seongnam cities in Gyeonggi, around 60 percent were in favor of delaying a return to school, and that his office proposed a delay to the Education Ministry based on such results.

A Blue House petition calling for the government to delay the restarting of school for all grades garnered over 183,000 signatories as of early Monday evening — over 20,000 new signatures compared to earlier that day.

The Education Ministry in turn has been evaluating the Covid-19 infection risks and surveying educators and parents.

However, high school seniors are in a dilemma because a further delay in their return to classes could hinder preparations for college entrance. The annual  state-administered College Scholastic Ability Test, or CSAT, usually held in November, has been postponed to Dec. 3 because of the coronavirus pandemic.