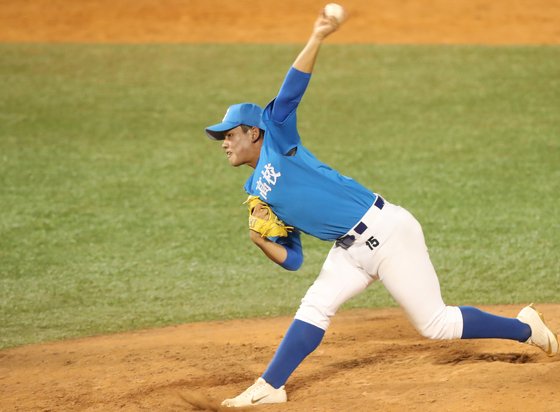 
A high school left-hander was selected first overall in the annual Korean baseball draft on Monday.

The Lotte Giants of the KBO chose Kim Jin-wook, senior at Gangneung High School, with the first pick of the annual amateur draft.

In line with social distancing measures in place during the coronavirus pandemic, the draft was held in a virtual format, with the room set up inside a Seoul hotel connected online with the front offices of 10 KBO clubs.

Kim pitched his school to the President's Cup National High School Baseball Tournament title last month, giving Gangneung its first national championship. Kim was named both the MVP and the Best Pitcher at the tournament.

In June, Kim led Gangneung to the final at another major national competition, the Golden Lion National High School Baseball Tournament, but the team finished runner-up to Gimhae High School. Kim threw 7 1/3 innings and struck out 11 in relief.

He won the annual Choi Dong-won Award, given to the country's best pitchers in amateur and pro ranks, in the high school category.

Kim Pung-cheol, the Giants' head of scouting, said Kim Jin-wook is as complete a pitcher as they could find, and that he could be a valuable piece either in the starting rotation or in the bullpen.

"He may not blow you away with his fastball velocity, but it's an area he can improve with systematic training," the scout added.

The draft was held in the reverse order of the 2019 regular season records.

The Giants had the 11th overall pick, and they chose Duksoo High School infielder Na Seung-yeop.

Na, regarded as the top infield prospect in this year's class, announced last month he was going to sign with a major league club, reportedly the Minnesota Twins. But with no deal in place yet, the Giants went ahead and drafted him.

Monday's draft followed the territorial draft from August. Back then, teams could each select one amateur from their areas, though the bottom three clubs from the 2019 season were allowed to select out-of-town talent. The Giants, based in Busan, had their eyes on Na, whose school is in Seoul, for that draft. They chose another player instead and waited until the second round on Monday to select Na, who may not even sign with the Giants.

Na's father, Na Hee-cheol, thanked the Giants for selecting his son but said Seung-yeop still wants to play in the United States.

"We've already made a verbal commitment with a major league club," the senior Na said. "I'll talk with him about his future again since he was drafted by Lotte, but his desire to play in America hasn't wavered."

The Giants said they knew of the risks of drafting Na, but added, "Considering his talent, we felt it was well worth selecting him in the second round even if we end up losing that pick."