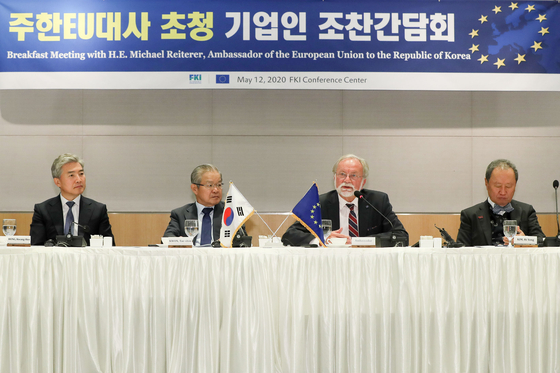 EU Ambassador to Korea Michael Reiterer, second from right, speaks during a meeting at the Federation of Korean Industries in Yeouido, western Seoul, on Tuesday.


A major business lobbying group made a case Tuesday for a currency swap deal with the European Union and an easing of entry restrictions between Korea and the EU.


Michael Reiterer, the EU's ambassador to Korea, struck a cautious note during a meeting with members of the Federation of Korean Industries, while acknowledging the need to increase liquidity.

“We need to make sure there is liquidity in the economy. That's an important task,” he said. "And I think this is also where your idea of currency swap comes in.

At the meeting, Kwon Tae-shin, vice chairman of the federation, said the time is ideal for talks on a currency swap because the coronavirus is eroding the liquidity of many businesses.

A currency swap allows two countries to exchange payments in one currency for an equivalent amount in the other to facilitate bilateral trade and offer liquidity support to financial markets.

The euro is the second most commonly used currency for foreign exchange dealings in Korea, after the U.S. dollar.

Korea currently has bilateral currency swap deals with eight countries, including the United States, Australia, Canada and China, and a multilateral deal with Asean.

Also proposed by the vice chairman was a fast-track system for businesspeople from the EU and Korea to be exempted from entry restrictions raised in the wake of the pandemic.

The ambassador suggested a revision to the 10-year-old EU-Korea FTA with the aim of widening its scope.

“Although our FTA is delivering, it is ageing and losing relevance at a time of growing e-commerce,” Reiterer said in a speech.

The upgrade could address the issue of legal loopholes and add new features that were enforced in trade agreements with other countries.