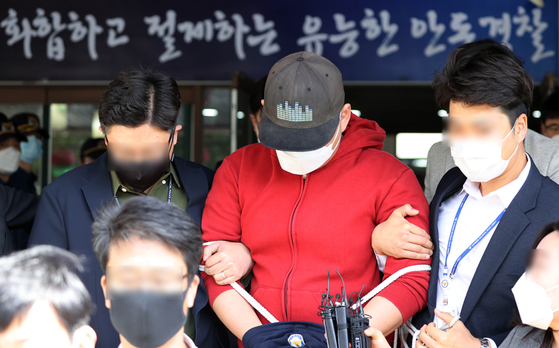 The suspect allegedly behind an online pornography ring known by the internet alias "God God" leaves a police precinct in Andong, North Gyeongsang, to attend a court hearing for his arrest on Tuesday. [YONHAP]


The Korean government made major changes to the law to crack down on the growing plague of digital sex crimes prompted by the Telegram sex trafficking scandal.

In a cabinet meeting headed by President Moon Jae-in, the government promulgated a law mandating any person who purchases or is in possession of pornographic material depicting sexual exploitation be punished with a maximum three-year jail sentence or a fine under 30 million won ($24,500).

Such material includes photographs or video footage of sexual acts taken without the consent of those depicted, as well as those digitally manipulated through so-called deepfake technology.

Punishment for those who manufacture or distribute such material has also been increased from a maximum five-year sentence to a maximum of seven years.

The age of consent was also raised from 13 to 16, thereby expanding the number of minors protected under the statutory rape law. The statute of limitations for statutory rape or sexual abuse of minors under the age of 13 was eliminated, and people convicted of those crimes can no longer get off with a fine and must go to jail.

The tightening of the laws was first announced late last month by Noh Hyeong-ouk, minister of the Office for Government Policy Coordination, who said the measures were meant to fight an onslaught of new forms of sexual crimes in the digital sphere brought to light by the infamous “Nth room” pornography trafficking rings.

The National Assembly passed the measures by a vote of 187 to 1 on April 29.

Suspects in the Nth room case are accused of blackmailing what could be over a hundred victims into providing sexually explicit and degrading photographs and videos of themselves, which were sold to people in chat rooms on the Telegram messaging app.

A new conspiracy charge was also created specifically for digital sex crimes that allows punishment for suspects who conspire in such acts even if they haven’t yet committed them.

The laws will take effect immediately, though the revisions to the statute of limitations for some of the crimes are due to come into force six months from now.

“We will break the chains of sex crimes deeply enrooted in our society that have been exposed with the Nth room case,” read a Ministry of Justice press release.

One of the first suspects likely to be punished under these strengthened laws is a figure known by his online username “God God,” who was placed under pretrial detention Tuesday after a local court approved a warrant for his arrest.

Identified only by his surname Moon, the 24-year-old admitted he was responsible for operating the first of the Nth rooms on the messenger app Telegram, through which he allegedly distributed hundreds of pornographic videos and photographs of ordinary victims.

His hands bound and his arms firmly bolstered by police officers on each side — a tradition of Korean perp walks — the portly suspect remained mum as police dragged him off to a court hearing Tuesday morning.

The court ruled for his detention after a hearing of only 30 minutes, saying Moon was likely to tamper with evidence or flee if left to face trial on bail.

The bespectacled suspect, who was wearing a face mask, delivered a short apology to his victims after the hearing, telling the press he accepted the accusations leveled against him.

Police are set to hold an internal committee hearing Tuesday to determine whether to reveal the suspect’s face and identity to the public, as they did with other major suspects in earlier Nth room busts.