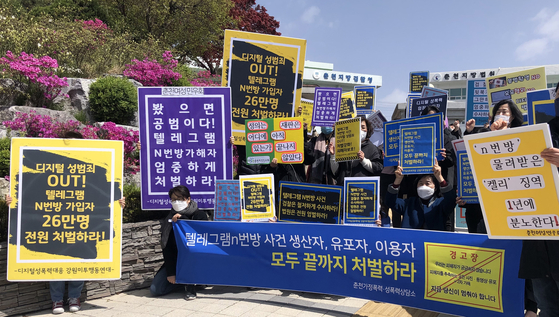 Civic groups for women's rights hold a demonstration in Chuncheon, Gangwon, on April 22 to call for strong punishment of the alleged operators and paying members of the pornographic chat rooms on Telegram. [YONHAP]


Police on Monday arrested who they believe is another one of the masterminds behind a massive online pornography ring that enslaved dozens of women and minors.

According to the North Gyeongsang Provincial Police Agency, a 24-year-old man who was apprehended on Saturday on suspicions of being linked to the so-called Nth room case admitted to authorities he was behind the username “God God,” the figure responsible for operating the first of such chat rooms on the messenger app Telegram.

Under that alias, the suspect ran eight separate Telegram chat rooms from February to August last year, through which he distributed hundreds of pornographic videos and photographs of victims to paying members.

Alleged victims of the ring are estimated to range in the dozens, including many minors. Based on investigative reports of the case, God God approached the victims under false pretenses, and after obtaining their private information, exploited them into providing him with compromising videos and photographs of themselves.

Cho Ju-bin, the now-arrested prime suspect accused of running a similar series of chat rooms named after his own internet alias, Baksa, is believed to have copied God God’s methods when he created his own ring in around September 2019, which was around the time when God God stopped operating his chat rooms.

Another 38-year-old operator of a chat room called the “Gotham room” was identified by the surname Jeon and is already in custody for a different crime. Jeon, who went by the alias “Watchman,” was one of two figures who directly succeeded God God in running the Nth room chat rooms after the latter announced he was retiring from the operations to take his college entrance exams.

God God’s capture on Monday comes after a drawn-out search that took several months. Police faced difficulty tracing down the suspect’s whereabouts since he had conducted his online activities through a false internet protocol address. God God himself said in a chat room run by Cho in January this year that police would never catch him, since he had been paid in gift certificates rather than cryptocurrency.

But police enlisted the services of Senior Superintendent Jeong Seok-hwa, a two-decade veteran of cybercrimes, who played an instrumental role in capturing Son Jong-woo, the convict arrested in March 2018 for running the largest dark web child pornography website in the world.

The probe quickly picked up speed and narrowed in on God God last month, leading Police Commissioner General Min Gap-ryong to announce last week that a likely suspect had been identified.

After placing him in custody, police filed a warrant for God God’s pretrial detention. A court hearing is likely to take place within the next few days to review the request.

It is also likely that authorities will seek to disclose the suspect’s identity to the public, and force him to undertake the same kind of perp walk that Cho, Kang and Lee were subjected to.

Police also said Monday they will look into God God’s links to Cho and whether the former can be indicted under a special conspiracy charge that has been applied to Cho and his co-conspirators.

With God God’s arrest, all of the major suspects who headed the different pornography rings on Telegram are now in custody. However, one of Cho’s main co-conspirators, who went by the alias Samagui, still remains at large.

A continued investigation into God God could help reveal a clearer count of victims, as well as paying members, of the chat rooms. Cho’s Baksa room had around 15,000 paying members, police estimate, many of who are believed to also have been part of God God’s Nth rooms.