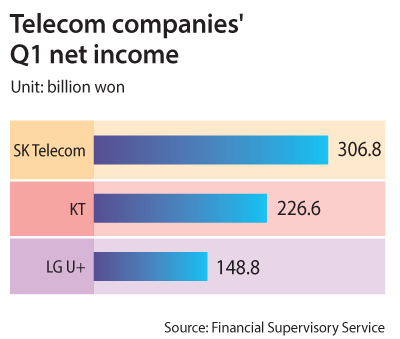 Telecommunication service providers managed to post better-than-expected profits in the first quarter, buoyed by a jump in the number of subscribers for 5G wireless connectivity and internet protocol television (IPTV) business.

KT announced on Wednesday that it registered 226.6 billion won ($185 million) in net profit between January and March, down 12.8 percent compared to the same period last year, but slightly higher than the market estimate of 222.6 billion won compiled by FnGuide.


KT attributed the upbeat earnings to the rising number of 5G subscribers that drove sales of its wireless business. Those customers provide a wider profit margin than 4G LTE users, according to the company.


Sales from the mobile telecom sector increased 1.9 percent to 1.7 trillion won. 5G subscribers at KT totaled 1.7 million at the end of March.


The company’s IPTV business generated 417.7 billion won in sales, up 11.9 percent from a year ago. The number of people subscribing to the service amounted to 8.4 million as of the end of March, gaining 5.7 percent compared to the same period last year.

LG U+ also beat the market estimate during the first three months of 2020, aided by growing IPTV customers and reduced marketing costs.


Its net profit jumped 12.2 percent to 148.8 billion won in the first quarter, exceeding the market consensus of 134.4 billion won.


The company did not announce its first-quarter revenue but said sales advanced 11.9 percent to 3.28 trillion won. Its operating profit jumped 11.5 percent to 219.8 billion won, edging out the average market forecast of 201.2 billion won.


The carrier pointed to declining costs compared with the previous year, when it invested heavily into promoting 5G-based subscription plans for smartphone users ahead of the service’s launch.

At the same time, LG U+ saw an increasing number of people enrolled with the IPTV service as the figure increased 10.8 percent to 4.59 million subscribers.